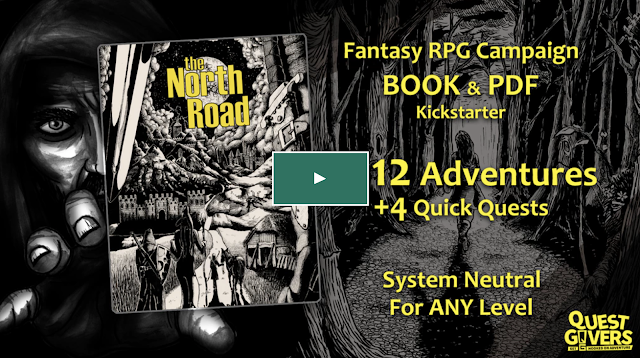 Sometimes I look at a Kickstarter project and all I can think of is what an Administrative Judge said to me at my first traffic court appearance as a rookie. I wrote a ticket for someone that rolled through a stop sign. At court, I testified and the judge said "Officer, you are 'this close' to the gold ring. Review your testimony and give me the missing piece." I had no clue and the summons was dismissed.

The North Road - A Fantasy RPG Campaign BOOK and PDF is probably NOT going to fund. Which is a shame, because it's an interesting looking project. There are a few issues that I have with it.


From the Risks and Challenges:

To avoid complexity we have kept this Kickstarter as simple as we can. All content, artwork and photography have already been completed. What remains is finalising the layout for the book and PDF. Most of the layout exists already for the PDF versions of each module, however, we will be reworking these for print (and adding some extra details).

You would think they could give an estimate on the number of pages. Awesome that it's already written. Not so awesome that you can't put a number to it.

Ah well. Not quite halfway to goal with less than half the funding period left. Maybe a cheaper option to just get the first few adventures in PDF could help. Or not.