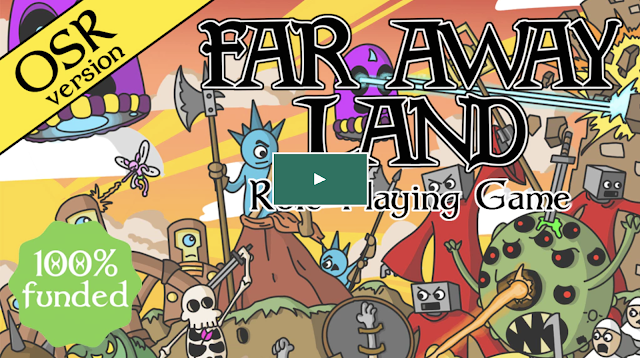 "OSR version of the Far Away Land RPG compatible with older versions of the world's most famous game and its clones."

My experience with Far Away Land has been magical, so obviously I am biased. See, Dirk gives FAL adventures away at PWYW pricing, and that is how I sampled FAL for the first time and I was hooked. The art and the implied setting were chum in the water and the next thing I knew I had all of the releases and was running a session of Far Away Land myself. Me, the "I'll never run a non-OSR game" was running a non-OSR game. The thing is, FAL had obvious OSR roots, and now it has come back to its roots.

Did I mention I wrote a forward for the Far Away Land Old School Role-Playing Game? Yep, I did. No, not biased at all ;P


Project Description: The Far Away Land (FAL) OSR is a re-imagining of the Far Away Land RPG – through the lens of OSR-style games and mechanics. This project was inspired by Swords and Wizardry Light, a stripped-down, rules-lite version of Swords and Wizardry that uses only d20s and d6s. FAL was originally inspired by simple, old school gaming mechanics that place emphasis on characters, story, and adventures rather than heavy rules. This version of FAL uses familiar mechanics (6 stats, HP, AC, etc.) mashed into the Far Away Land setting. It maintains the tradition of a rules-lite game while using a more well-known system that is compatible with the world’s most famous rpg and many of its clones. Essentially, FAL OSR is a complete circle, back to what initially inspired the original game, set in the gonzo world of Far Away Land.

The FAL OSR Physical Book: The physical book is 130 pages, 8.5 x 11, full color. It features rules for character creation, new classes, new playable races, 100 monsters, new spells, tons of rules for various mini games and lots more (detailed chapter by chapter below). The book is written, tested, and finished. It has a ton of artwork in the style of Far Away Land and maintains the quirky nature of that setting while giving players familiar (although modified rules). The pdf is bookmarked with a complete index and table of contents.

Shit, just read the FAL Kickstarter page. the is much awesomeness there :)