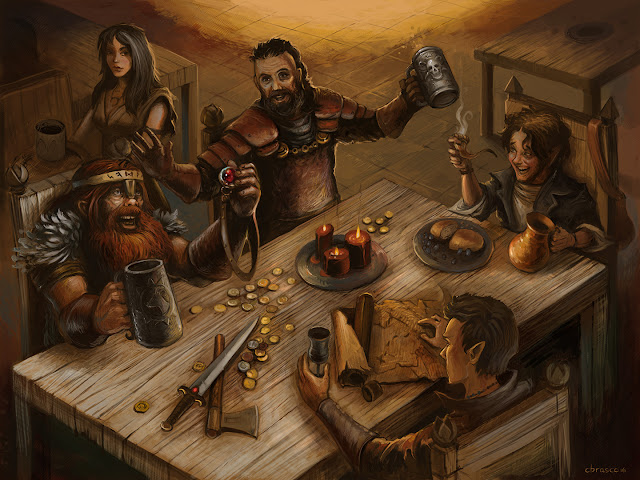 I can't believe we've done eight interviews in the Designers & Makers series on the Tavern Chat Podcast thus far. Not that I can even call them interviews anymore, because they don't keep to a script. It was suggested I refer to them as "fireside chats" and I guess that's as accurate as anything.

So, here are the ones we've done thus far:


Today we kick off the Designers & Makers series of interviews (with about 40 interviews currently on the grid over the next three months). Michael "BadMike" Badolato has the notoriety of being our first guest in the series. BadMike is one of the main guys behind the NTRPG Con, works for Frog God Games and does his own business selling old school games on eBay. Join us as BadMike answers "Ths Five Questions" after which we free range a bit ;)


On today's episode of the Tavern Chat Podcast, I talk sit down across the virtual table with Tom Knauss, best known for his work as a writer for Frog God Games. We talk RPGs, art, Hawk the Slayer and more ;)


In this installment of the Designers & Makers series of interviews, I talk with Carl Heyl of the Save or Die and The Crusader Podcast. Yes, we even talk Hawk the Slayer ;)


Today I interviewed Zach Glazar (Frog God Games). No Hawk the Slayer question, because the man has never seen the movie. Sigh.


In this episode of the Designers & Makers series of interviews, I talk with Douglas Cole of Gaming Ballistic. We talk GURPS, OSR, Kickstarter, usable unarmed combat rules for OSR gaming, as well as Doug's current Kickstarter - Lost Hall of Tyr (2nd Edition)


This morning we recorded another in a series of interviews with Designers & Makers in tabletop gaming. With this episode I hang with Jason Hobbs, of the Ennie nominated Hobbs & Friends of the OSR, Hex Talk and Random Screed podcasts. Jason and I have been friends for a while and it was great to catch up with him :)


Today we have the next installment in the Designers & Makers series of interviews. I am actually loathe to call them interviews at this point, as they have turned more into friendly chats than scripted interviews. This time I sit down with Ia McGarty of Silver Bulette Publishing.


In today's episode of The Tavern Chat Podcast I hang out with Omer Golan of Stellagama Publishing. Omer has a number of releases in support Stars Without Number and White Star but is perhaps best known currently for Cepheus Light, a reworked and reedited version of Cepheus, which is itself an OGL clone of Mongoose Traveller 1e. Come for the Traveller talk, stay for the AD&D 2e observations ;)

Later this week we'll be adding interviews with Vince Florio (Wild Games Productions / Podcaster), Sizzoul (Strange Gods Podcast), Skeeter Green (needs no introduction ;) and Josh Beckelheimer (JB Productions) with at least another eight on tap before the end of January.

Strap in because it's going to be a helluva ride!  :)