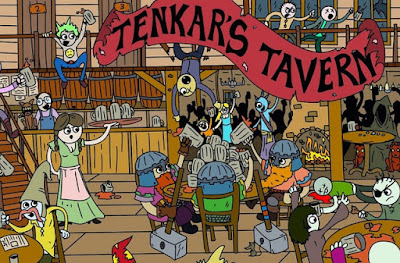 Last week was a busy week in the Tenkar household. We started with a stomach virus at the beginning of the week and finished it with three birthdays in the end. All that and we kicked off the Designer's and Makers series of interviews on The Tavern Chat Podcast. Woot!

E207 - Podcast Nominations at ENWorld and some Minor Rants
Published on Dec 9, 2018
ENWorld is looking for nominations of the Best Podcasts of 2018. I rant a bit about the LotFP Referee Book and Far West, then look at the POD of the AD&D 2e rulebooks on DriveThruRPG.

E209 - Episode Zero of Designers & Makers - Wherein Your Bartender Interviews Himself ;)
Published on Dec 11, 2018
We'll be kicking off the Designers& Makers series of interviews in the next couple of days, but to prepare folks for what's in store, I asked myself (and answered) the five questions that will be asked of all. These are not the be all and end all of the questions, but simply a common baseline. Enjoy :)

E210 - Designers & Makers #1 - Interview with Michael "BadMike" Badolato (NTRPG Con/Frog God Games)
Published on Dec 12, 2018
Today we kick off the Designers & Makers series of interviews (with about 40 interviews currently on the grid over the next three months). Michael "BadMike" Badolato has the notoriety of being our first guest in the series. BadMike is one of the main guys behind the NTRPG Con, works for Frog God Games and does his own business selling old school games on eBay. Join us as BadMike answers "Ths Five Questions" after which we free range a bit ;)

E211 - Hawk the Slayer - I Finally Watched from Beginning to End
Published on Dec 13, 2018
Yep, apparently I never actually watch Hawk the Slayer in its entirety until this morning. You can find it to stream on Amazon (3 bucks to rent / 10 to buy) Its a fun movie so long as you go into it accepting its limitations - low budget, poor acting, lame special effects, and a horrid script. Pass me the beer and popcorn please!

E213 - Designers & Makers - I Talk with Tom Knauss (Writer/Freelancer/Frog God Games)
Published on Dec 15, 2018
On today's episode of the Tavern Chat Podcast, I talk sit down across the virtual table with Tom Knauss, best known for his work as a writer for Frog God Games. We talk RPGs, art, Hawk the Slayer and more ;)
Posted by Tenkar at 10:57 AM