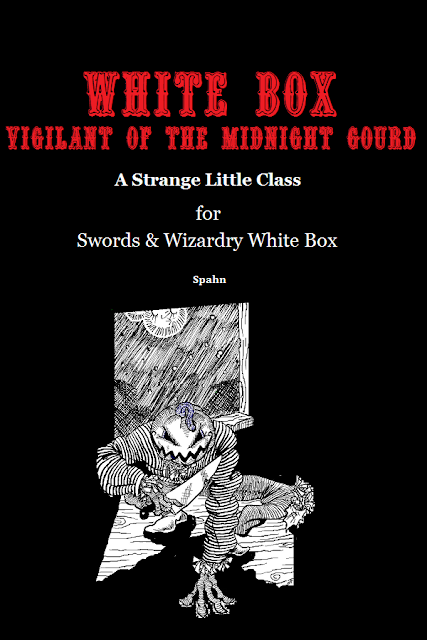 James Spahn gives us a new class for Swords & Wizardry just in time for Halloween - White Box: Vigilant of the Midnight Gourd.


Those Who Faithfully Await His Return Are Rewarded...

White Box: Vigilant of the Midnight Gourd puts a dark twist on a modern Halloween classic, reshaping it into a terrifying and twisted class for use with Swords & Wizardry White Box and other OSR roleplaying games.

Children who wait in the pumpkin patch sometimes receive strange gifts and become known as the Vigilant of the Midnight Gourd. Entice new followers to your dark master with sweet treats, stand sleepless and untiring in the pumpkin patch, and cut down those who would dare doubt the existence of the dark gourd that is your master with this 10-level class!

Damn it, James! Now I want to write an adventure centered around this. How much time do we have before Halloween?

White Box: Vigilant of the Midnight Gourd is available in PDF for a buck at RPGNow.

Yep, that's an affiliate link above. Go ahead, buy your bartender a beer ;)