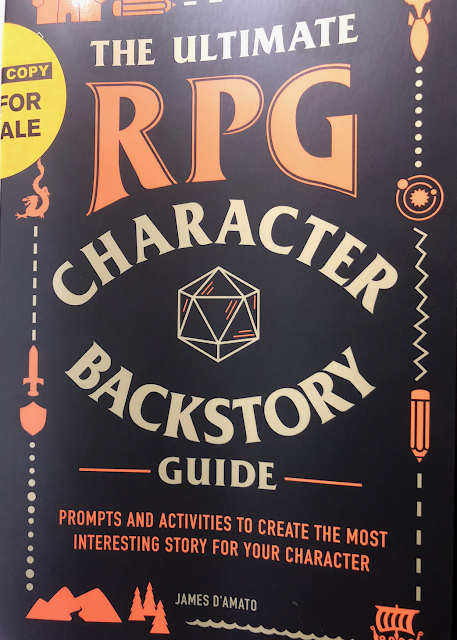 Long story short, I was offered a reviewer's copy of The Ultimate RPG Character Backstory Guide by the publisher. How could I say no?  ;)

I gave my initial impressions (they were good) last week on The Tavern Chat Podcast, but how does "The Ultimate" stand up to a more thorough perusal? Very well.

Let me start by repeating something the author himself mentions - hop around the book. Use what inspires you. There is no need to use it all - hell, I don't think that is possible or even advisable. Simply use what works.

Now, I am primarily a DM / GM these days, and I'm going to ask you to note that the title doesn't say "Player Character... Guide" but "Character Guide". Think of this book not just as a useful tool for the players at your table, but an amazing toolkit to give your NPC some depth.

The first entry is a series of tables to invent your own idioms. Want an easy way to make each town identifiable for your players? Give your shopkeeper a unique idiom or two.

"Can't make a dwarf till a field."

"A foolish thief finding a dragon's horde may as well dig his own grave."

"Happiness gets you killed in front of hell's black gates."

Damn. I could really enjoy this :)

Some of the sections are of the "world building" type. Unique holy/holidays, a character's approach towards religion, details of your homeland/town/etc. These sections work best hand in hand with your DM, but also serve the DM well as he/she seeks to add depth to the campaign world - either one of their own creation or taken off the shelf. Its details like this that make an RPG campaign more than a simple series of connected adventures but a living, breathing world.

One of my favorite entries deals with what a character brings with them on adventures to keep that connection to home. Again, its presented as a tool for your players, but imagine the response when your players find the bandit leader's lair, and there is a small jewelry box filled with earth next to his bed. Is it magical? What's the purpose? (I still remember my Commanding Officer in the late 90's, when I was a cop in the South Bronx, having a small piece of Irish Turf on a shelf in his office, to remind him of his childhood in Ireland)

The most surprising thing about The Ultimate RPG Character Backstory Guide is that it hasn't been done before. I find myself reading sections like Five Things You Can't Throw Away (applies as much in real life as it does in game) and Wanted (the joys of "Wanted Posters") and think "This is brilliant!" followed by "How come I never thought of this?" It's obvious once it's brought to one's attention, but the fact is that the obvious often remains hidden in plain sight. It takes the right person, or writer, to bring it into the light.

I can give The Ultimate RPG Character Backstory Guide the following praise - it's inspired me to want to kick off a new RPG Campaign for the first time in a year and a half. I want to DM a campaign and I want to play in a campaign. I want to pick through the guide for nuggets of inspiration, for added depth to my next gameworld. I can think of no better endorsement other than "this book will be used". Sadly, I can't say that for the vast majority of my gaming collection.


Ramp up your role-playing game and make your character your own with this fun, interactive workbook—an essential addition to any RPG player’s gaming kit.

You’ve chosen your class, bought your weapons, and rolled for your stats, and you’re now the proud owner of your own RPG (role-playing game) avatar. But before you begin your adventure, there’s so much more you can do with your character to make him or her your own! Just how evil is she? What does his dating profile look like? Where did she get that scar? What does he want for his birthday? With fill-in-the blank narratives, prompts, and fun activities to help you customize your character at the start of the game, or build out your backstory as you play, The Ultimate RPG Character Backstory Book will help you fully imagine your character and bring them to life for the ultimate gaming experience!