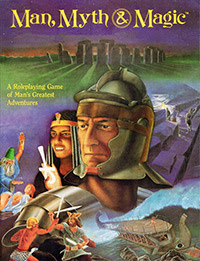 I never played Man, Myth & Magic when it released, but I do remember the advertisements in Dragon magazine and I was intrigued. I just never had the funds. 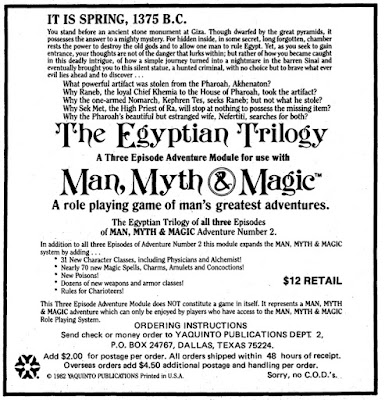 Precis Intermedia has announced they will be reprinting Man, Myth & Magic and I'm kinda excited. I don't expect I'll ever play the rules, but I'm looking forward to owning and reading them.

Anyone play Man, Myth & Magic back in the day? What was your experience?


Your journey has been long and arduous, but you and the rest of your party finally camp within the great stone ring of Salisbury plain to spend an anxious night waiting for the golden glow of the midsummer day's dawn. Your thoughts are not of the mad emperor, Caligula, who sent you on this maniacal quest. Nor do you dwell upon the evil clans of Black Druids, who stood between you and this night. Rather, you ponder the unknown, mystical dangers that lurk within these very stone megaliths, as well as the hazards and powers that will be unleashed as sure as the sun will rise. Obsessed with this premonition of danger, you have not the slightest inkling that you will be irresistibly pulled into a series of events of such magnitude that they not only dwarf Caligula and Rome, but form the greatest adventure in human history. You have not the slightest suspicion that tomorrow's dawn will throw you into danger and intrigue, leading you to discover... the riddle of Stonehenge... the secrets of the pyramids... the mysteries of the ancient world.

Man, Myth & Magic is a fantasy roleplaying game set in the ancient world. A world seen not from our modern historical perception, but rather through the eyes of the people who lived it. A world filled with magic and sorcery, demons and monsters, and incredible powers and forces that hold the key to the domination of all mankind. Reincarnate as an Egyptian Sorceror, British Druid, or even as an Irish Leprechaun to face the might and mysteries of the ancient world. 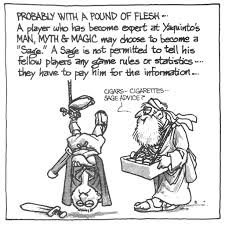