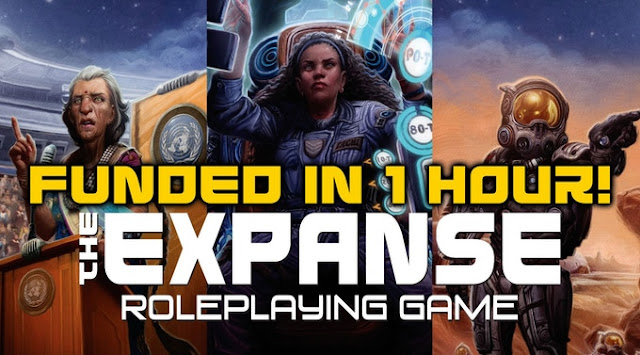 I haven't read the books but I've caught the first two seasons of The Expanse on demand and oh my God, what a great binge watching it was. To find out that the series of books the TV show is based on was in turn based on an RPG campaign? Awesome. And not at all surprising. I thought to myself "this would make a great RPG Campaign!"

Now we have The Expanse Roleplaying Game Kickstarter. Its come full circle.


The Expanse Roleplaying Game brings James S.A. Corey’s award-winning series of science fiction novels to the tabletop. Using the Adventure Game Engine (AGE) rules found in Fantasy AGE, Blue Rose, and Modern AGE, The Expanse takes players to a far-future solar system where humanity is divided: Martians, Belters, and the people of old Earth struggle for political power and resources, but even older, alien, forces are stirring in the universe, and human history is about to take an unexpected new turn. The Expanse applies the fast-playing and action-based AGE rules to spaceships, solar colonies, and adventure and intrigue in the far-future, where the actions of the characters may change the course of history!

As long time fans know, The Expanse was a roleplaying game campaign long before it was a series of novels or a TV show. We are delighted to bring it full circle with this game! And here's the best thing about The Expanse RPG: we've been working on this for well over a year and rules are done! They've been through multiple iterations and playtesting, and we've worked closely with Ty Franck and Daniel Abraham (together, James S.A. Corey) throughout to ensure we are getting The Expanse right.

Best pledge point? 70 bucks IMHO. All you need in print and PDF. Did I mention the Kickstarter is funded at over $316K as I type this?

Even if I never run the rules as written, the source material is worth it for me.

Email ThisBlogThis!Share to TwitterShare to FacebookShare to Pinterest
Labels: kickstarter, the expanse