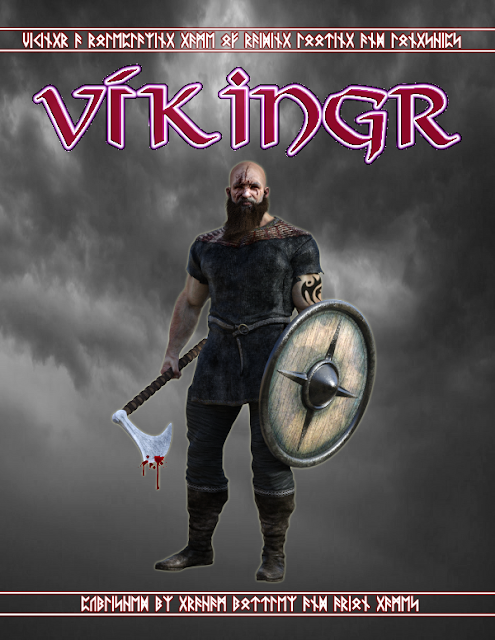 This is going to be a "Kickstarter Weekend". I'm peeking at lots of them and more than a few have stuck out.

Why, when I've already backed Dragon Heresy (which I'm really looking forward to) would I be peeking at another Viking themed RPK Kickstarter?

Second, the PDF backing level is about 7 bucks. That's the price of a beer at my pub (thank God for buybacks ;)

Third - POD plus PDF is 12 bucks plus cost via OBS - about 18 total for the Soft Cover and 22 for the Hard Cover - plus shipping.


Vikingr
n. Any of the Scandinavian pirates who plundered the coasts of Europe from the 8th to 10th centuries.

The Vikings (as we now call them) have held a huge grip on the imaginations of writers, film makers and in fact everyone for many hundreds of years.  This makes the Vikings (or Vikingar as they were originally known) a rich source of inspiration for RPG's.

Some people prefer a strictly historical game, others a semi-mystical game similar.  Yet others desire to run a game styled after Beowulf or maybe even a game set in a fairly standard fantasy world but in the northern "viking-like" regions.

Whatever your preferred Viking game, this is the ruleset for you.  Based on the free D6 ruleset from West End Games, we give you all of the rules needed, Hero creation, Ships, Warbands, Gods, Omens and Runes, Scandinavian monsters and myths and much more.  Fast and cinematic, this game will see your Heroes pillaging, cleaving and rampaging in no time!