Filing an FTC Complaint Against #ConManKen? I'd like to Keep a Tally 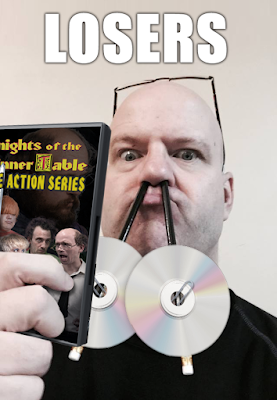 As the saying goes, there is strength in numbers.

Yesterday, we posted how backers of the KotDT:LAS Kickstarter could file FTC complaints against Ken Whitman as he is now legally required to refund backers. I would like to keep a tally of such complaints as they WILL result in a criminal investigation of #ConManKen.

If you would be so kind as to email me at tenkarsDOTtavern at that Gmail thing with "ConManKen" in the subject of the email we can get the list going.

All I ask is for your first name / pen name and backer level for tracking. I'll post a running tally as to the number of complaints made and total backer dollars of the complaints on one of The Tavern's sidebars.

There are 9 backers of $1k or more on KotDT, including one $5k+ pledge. If you can't get what you backed for in the past you can help Kenny to three hots and a cot in the future...

Edit: Kenny, just so you know. THIS is how you get legitimate federal charges filed. Not threats of imaginary FBI agents waiting at someone's door for Coffee & Donuts to investigate laws that you either made up or fail to understand. You REALLY should never have made those threats Kenny, because the threats themselves are a violation of federal law. Oh, and they pissed me off. Yes they did.

2nd Edit: No, you don't own the copyright to the above image.
Posted by Tenkar at 11:12 AM