KotDT:LAS to Release to Backers - Ken Whitman NOT Involved - Scream Heard Around the World! ;) 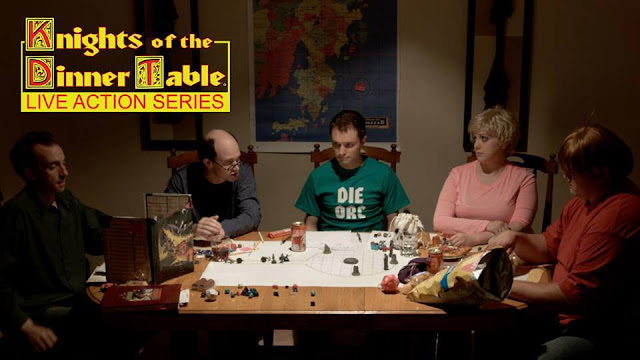 I knew stuff was in the works and I'm thrilled to see its official. Knights of the Dinner Table" Live Action Series will be making it into the hands of backers DESPITE the best efforts of #ConManKen. Gee Kenny, what's that I hear? A loss of a position of posturing power has lead to tears? Awww! I'm so sorry. Here, let Poo Poo Face wipe your eyes with some sandpaper. Oh, don't forget you are still on the hook for all those rewards...

I'll just run the statement from Ben Dobyns (Zombie Orpheus Entertainment) we are running in Knights of the Dinner Table #252 below - but to quickly summarize, thanks to Ben the three episodes of KODTLAS are finally going to get in the hands of the backers who paid for them. More details coming. If you backed this project, check your email for information from backerkit on how to proceed.

Very stoked about this. To be very clear, Ken Whitman did not participate or help in this development. Ben Dobyns invested his own time and talents in making this happen. I want to personally thank him and Zombie Orpheus Entertainment for doing stepping in and stepping for backers making this happen. More details to follow but here is Ben's statement...

PS: I want to thank David Scott Kenzer for signing off on this.

<<Hello to the backers of Knights of the Dinner Table: The Live Action Series – My name is Ben Dobyns (CEO of Zombie Orpheus Entertainment, producer of The Gamers and JourneyQuest, etc) and with Kenzer and Company's permission and encouragement I've managed to cobble together complete edits of the three original Kickstarter-funded KODT episodes.
I used a combination of the incomplete footage on the original hard drive that Ken Whitman sent, low-resolution rough cuts from Jolly Blackburn's Dropbox, and any other resources that I could find. It's not perfect—and it probably never will be—but it's better than nothing.
With the original Kickstarter creator apparently permanently out of the picture, Kenzer and Company and I discussed whether it would be possible to at least let backers see the film project they paid for.
I reached out to BackerKit and, thanks to major technical support from their team, we were able to build a pledge fulfillment survey for all of the original KODT:LAS backers. Those surveys will soon be going out to backers!
So, if you're a backer, here's what that means: You'll be able to fill out your BackerKit survey. Then you'll receive a download of KODT:LAS -- The Reconstructed Edition
And optionally, you can order a DVD (at cost) from our print-on-demand partner
YES, it's not a complete Kickstarter fulfillment, we all get that. I don't have the funds (or responsibility) to print up all of the rewards that the original creator (Ken) promised. But I can at least give you a version of the movie.
This has been a labor of love. I'm not making any money from it. Kenzer and Company isn't making any money from it. We just want you to have a copy of the series that you paid for.
Thanks for your understanding and patience, thanks to KenzerCo for allowing this, thanks to Zombie Orpheus for hosting the resources for fulfillment, and thanks to all of you for being loyal KODT fans.
Ben Dobyns
CEO & Exec. Producer
Zombie Orpheus Entertainment>>

And here's my statement which runs along side the new issue coming out next week...

<<Four years ago this month, 795 backers raised almost $70,000 to crowd fun a live action, Knights of the Dinner Table movie. Low budget to be sure, but the cast was amazing, a script was delivered and creative control was in the hands of the KODT D-team and for everyone involved it looked to be a fun project.

Then — as most of you know, the troubles began.
I won’t retread the sad details here other to summarize that the project creator (and the man who had sole acess to the funds) failed to uphold his part of the equation and effectively abandoned the project and went silent.

Which is doubly sad since everyone else involved DID do their part. The script was delivered. The actors and crew showed up. And three episodes of KODTLAS were filmed. All that was left to do was for Ken Whtiman to edit the footage and deliver the finished DVD to backers.
Obviously they never happened.
Enter Ben Dobyns.

Ben of ZOE (Zombie Orpheous Entertainment) took it upon himself to try and salvage something from the project for those who put up their hard earned money.

You can read the detail in Ben’s release below, but basically he cobbled together the footage of KODTLAS and manged to pull together, “A best possible cut with what we have” edition.

So the good news is, if you backed the project you can finally see all three episodes. I want to thank, Ben and ZOE for their hardwork and efforts on this front. It wasn’t THEIR problem. It wasn’t their project.
I’m extremely grateful that KODT fans will finally be able to see the hard work the actors, crew and backers put in to this. They deserved better than how they were treated by the project manager. Thanks, Ben.