RPGNow Deal of the Day - Mortzengersturm, The Mad Manticore of the Prismatic Peak (5e) 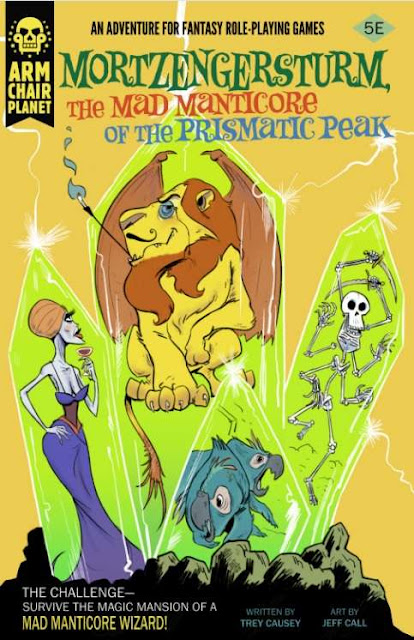 Today's Deal of the Day is Mortzengersturm, The Mad Manticore of the Prismatic Peak by +trey causey . Normally $7.99 in PDF, until 11 AM tomorrow morning (Eastern Time) it is one sale for $2.65.


After turning himself into a manticore, the self-style wizard-artiste, Mortzengersturm, moved to the crystalline peak of Mount Geegaw to practice his transformation magic without interference. You've been hired to snatch his most prized artifact, the Whim-Wham Stone--or at least some of its eldritch light. A menagerie of magic hybrids, a self-absorbed vampire, more than a few hippogriffs, and of course, the mad manticore himself await!

It's like a Rankin-Bass stop motion special--except it could end in a total party kill. Are you up to the challenge?

Mortzengersturm, The Mad Manticore of the Prismatic Peak is a 5e-compatible adventure for 5-6 players of 3-4th level set in the Land of Azurth. This digital edition contains exclusive extras: a map and brief gazetteer of Yanth Country (the locaiton of Mount Geegaw), and a short excerpt from an upcoming Land of Azurth adventure.

Email ThisBlogThis!Share to TwitterShare to FacebookShare to Pinterest
Labels: 5e, deal of the day