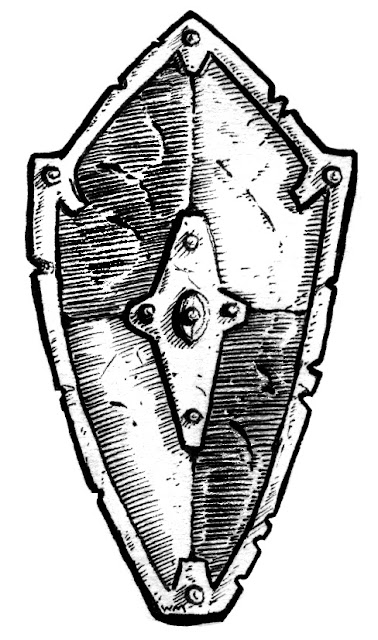 The Kite Shield of the Damned Lords is one of three surviving magic items associated with the Lords of The Crestfalls. Two brothers and a sister of the noble house of Avinier were sent on a quest to retrieve a piece of ancient knowledge. None of the three siblings returned, but their ghosts have been spotted roaming the streets of Town of Crestfallen, writhing in eternal pain.

The Kite Shield of the Damned Lords is a well worn shield, pitted and dented but still a solid piece of smithy work. Its enchantment comes into play when what would be a killing blow is struck. At such a time, the shield heals its wielder for 1d6+1 Hit Points. Otherwise it is treated as a + 1 magic shield. This effect may be invoked once per day.

Thanks to The Tavern's supporters at both The Tavern's Patreon and directly through Paypal, we have a monthly backing of over $150. This means 4 to 5 monsters for Swords & Wizardry Light / OSR per month, 4 to 5 Swords & Wizardry Light / OSR magic / wondrous items per month AND backers at $1.50 a month or higher via Patreon will get a collected PDF of the prior month's releases emailed to them. Paypal backers will need to email me in the middle of October to receive theirs. This is the fourth release for the month of October.
Layout for September's postings has commenced. Swords & Wizardry Continual Light has released on RPGNow in PDF Amazon for POD.