Some releases from this year: 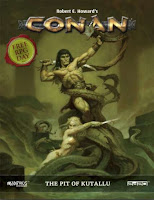 All you need are to play are two twenty-sided dice (2d20), a dozen or so six sided dice (d6), paper pens and some tokens or beads to track momentum, a group of friends and your imagination!

Vaginas are Magic! - Vaginas are Magic! is a book of blasphemous, dangerous magic featuring spells that only women characters can cast. It also includes a new magic system for use with Lamentations of the Flame Princess and all other traditional class-and-level tabletop role-playing games.

This is a book of 20 longform spells, a new magic system, and a short essay about magic. Each spell has its description, a half dozen effects if the spell is improperly cast, and a full page illustration accompanying it. Yes, that's 20 pages of art.

Spells are each named after a metal song. Of the twenty spells, three have sexual content, and three of the twenty illustrations could be considered explicit in that way.

RuneQuest Classic Quickstart - free in PDF https://www.chaosium.com/blog/free-rpg-day-is-over-heres-how-to-get-your-copy-of-the-rq-quickstart-if-you-missed-out/ but damned if I can find it at the site.

edit - and here's the RQC link: 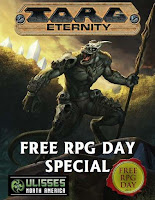 Torg Eternity - Free RPG Day Special - They came from other cosms—other realities—conquerors joined together to steal the Earth's living energy…to consume its possibilities. The Possibility Raiders brought with them their own realities, turning portions of our planet into someplace else.

But you were just an ordinary person living an ordinary life on the day the Maelstrom Bridge crashed down and New York began to transform...
Posted by Tenkar at 10:33 AM