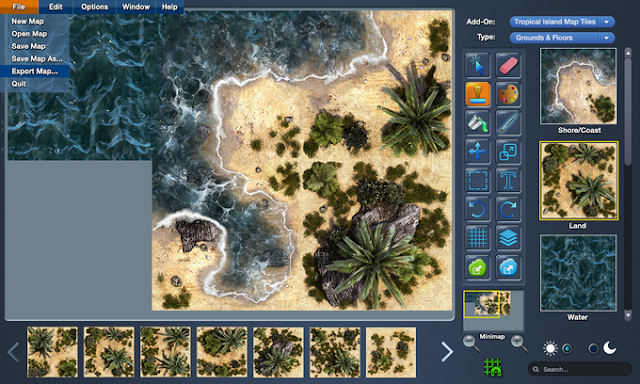 I've been following BattleGrounds Games for a long time. They are developers of one of the first Virtual Table Tops I played with, and even though I've settled on Roll 20 for simple ease of use, BattleGrounds was something I kept an eye on.

When I found out that BattleGrounds Games was working on mapping software for RPGs, I was excited. When I got a sneak peek at the Kickstarter page, I was even more so. MapForge reminds me of Dunjinni, but done right and with support.

The Mapforge Kickstarter launched over the weekend with a goal of $9k - its already surpassed $13k.

BattleGrounds Games has always been responsive to my inquiries for support over the years and I expect nothing less from their current Kickstarter.

Here's my one question - any chance of on of the content creators of the map graphics to license their work for commercial publishing? Inquiring minds want to know - and that could be HUGE for some smaller publishers ;)

You can increase your pledge for specific art resources - I might pick up a pack or two. Yes, I backed at $25 for now.