Alternative Facts. Catchy name for a game, right? So catchy that you might be tempted to use it EVEN AFTER another publisher just started a Kickstarter under the very same name. Because why bother to see if its already in use on the platform you want to fund on.

You know what? I really like the name Labyrinth Lord for an RPG. Its already in use? No problem. Mine is different. Its "Labyrinth Lord the Game." See? Totally not the same.

Hey, lets look at the quality presentation of Alternative Facts the Game, shall we? 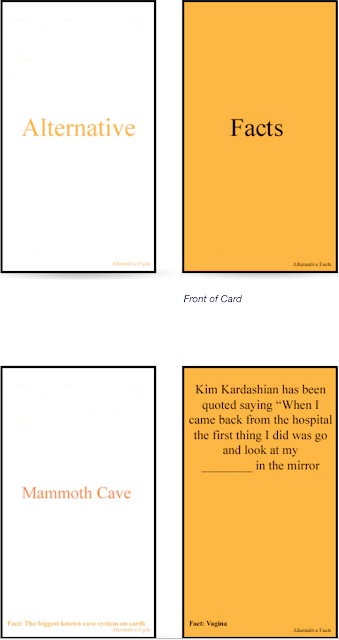 Wow! That just screams "Take my 25 bucks damn it!" Well, maybe not. Personally, it doesn't even whisper to me.

Here's the link to Frog God Games' Kickstarter for a similarly named card game that kicked first. Really, the only thing in common is the name.