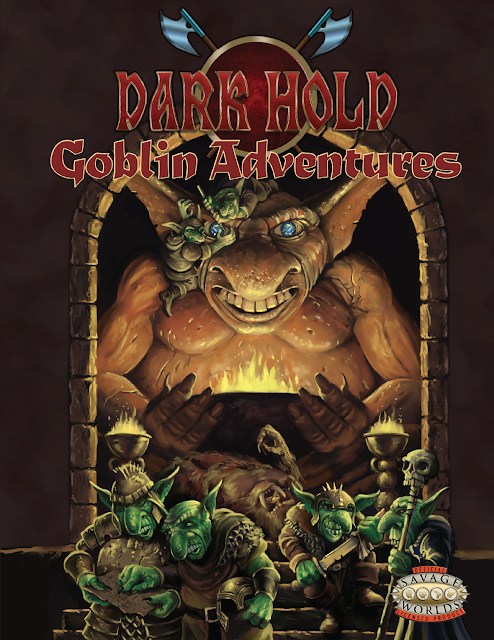 Savage Worlds is a bit of a paradox for me. I don't fully grok the system (powers / magic make me scratch my head) but I love the releases FOR the system. There is just so much good stuff for the Savage Worlds system out there.

First, that means you know the product is ACTUALLY written and laid out. None of this "4 1/2 years later" shit. It exists.

Second, it reads well. Part setting, part campaign, it all comes together nicely. In truth, it would be easy enough to convert to an OSR system of choice and would play well with old school tropes. Just need to remember you are playing goblins ;)

Third, I love the cover. Yet another reason to suggest (hint hint) an OSR treatment sometime in the future.

Stretch goals add short (1 to 2 page adventures) to the project. Three such have already been added. There are even minis you can get at higher support levels.

If you are a Savage Worlds fan, at $10 for the PDF or $15 for Print plus PDF, I think this is an excellent project to back. If you are an OSR fan with some Savage Worlds background, you could probable convert this fairly easily, as the crunch is much less important than the setting elements. That being said, if there were an OSR version, I'd buy it in a heartbeat.


Dark Hold Goblin Adventures is dedicated to the small groveling races which scratch out an existence in the dark catacombs through which other heroes stride like unto gods. Can you survive as one of a lost culture of Goblins living in the abandoned tombs of a long forgotten empire?

Dark Hold Goblin Adventures is a Savage Worlds compatible sourcebook (You will need a copy of the Savage Worlds core Rulebook) allowing players and game masters to run a campaign revolving around low level goblin characters.

Inside you will find a detailed history of the Dark Hold campaign setting as well as new character classes and templates to use Goblins as player characters. There is also a short adventure to whet your whistle for the challenge of playing low level goblins in a world of high level dangers.

Are you up for it?