Time to "Red Ink" White Box - Trimming the Fat to Get to S&W: Light 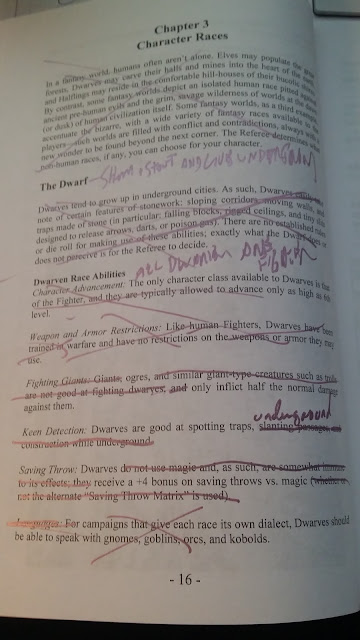 A while back I stumbled across a really good deal on Swords & Wizardry White Box softcovers. I ordered a half dozen with the intention of giving out copies to my old face to face gaming group at our next annual gathering. Once I got them, it was kinda obvious they weren't being sold by Matt or Mythmere Games. I wish I had paid closer attention. I wasn't going to hand out bootlegs, but throwing away gaming material felt like just compounding a bad situation. So, I put them on a shelf and there they sat. Until now.

Now that I'm working on what is tentatively titled Swords & Wizardry: Light, these books are a boon. I get to "red ink" - in metallic no less - a hard copy of White Box. It's actually a thrill to go through and trim what isn't needed.

The idea is that some of the material trimmed could be added back in a series of adventures. The same adventures that will be written to help a lapsed gamer regain his game mastering footing.

Now to rewrite the Sleep spell...