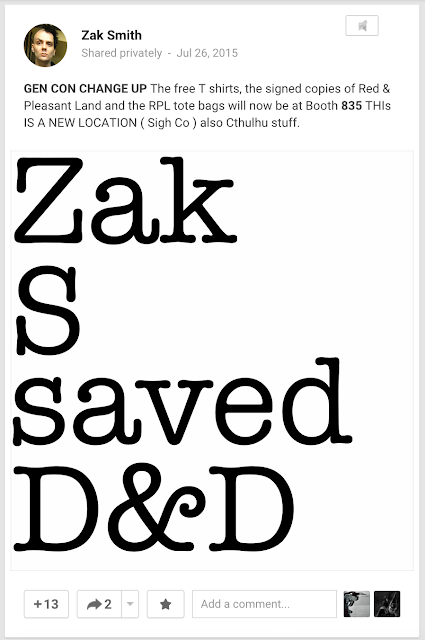 Now, I'm not sure if Zak is selling this shit or giving it away, but he has it on t-shirts. You too can be a Zak S zombie.

Hell, I'd ask what the fuck this is all about, because if Zak S saved D&D then the RPG Pundit should be offering similar shirts, as they both had the same input on the latest edition of D&D - they were "consultants." But Zak has had me blocked on G+ for years (say what you want about the RPG Pundit, but he doesn't block folks that disagree with him.) Third parties fill me in on stuff like this. I could be wrong. Maybe this isn't on a shirt. Maybe it's how Zak counts sheep when he goes to sleep at night.

Now, I would argue that the OSR saved D&D, not as a multi-media property but as an actual, playable, living RPG system. No, I'm not talking about 5e either.

Now, if Zak had shirts that said A Red & Pleasant Land is the Shit, I'd be forced to agree, It's damn good.
Posted by Tenkar at 2:54 PM