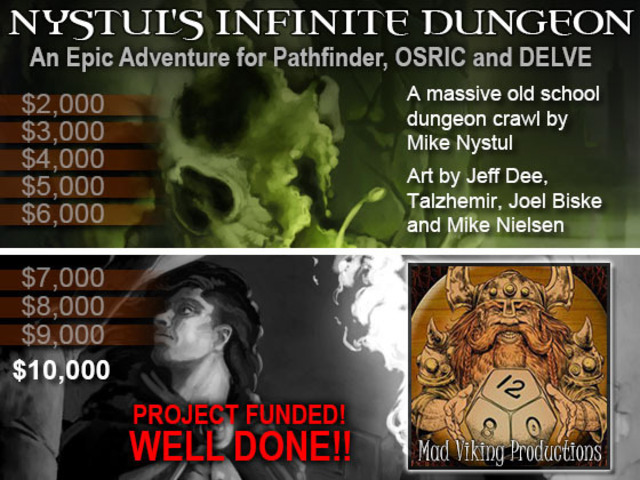 Woe unto you, self proclaimed Wandering Wizard, he that tried and failed to secure land for a Castle, lost his claim to Dwarven kinship, misplaced his Cairn and now has had title and responsibilities for his Infinite Dungeon (yet to be completed) returned unto him. The Infinite Headache is yours and yours alone.

Yes, tho hast failed in your attempt at "passing the buck" whilst failing to provide said bucks for services rendered.

Let it be entered into the Tome of Kickstarters: Failures and Fuck Ups, that Nystul's Infinite Dungeon has landed back in your lap. While we appreciate your work on the key to said dungeon, perhaps it wouldst be wisest to pay your workers for their services.

So it is written!

From an update in the comments section of Nystul's Infinite Dungeon - Kickstarter:

Posted on August 1, 2014 by Administrator

It is with a sad heart that I, Jason Yarnell, president of D3 Adventures, must inform all of you that as of this moment, D3 Adventures has returned the IP for Nystul’s Infinite Dungeon to Mike Nystul.

The property has, from the beginning, incurred one unexpected roadblock after another. The most recent of these concerned a lack of payment for a completed chapter. I was not made aware of this issue when D3 Adventures picked up the IP, and as of this date, the writer has not received the promised payment.

This is an unfortunate set of circumstances, and this decision was not made lightly. D3 Adventures promised that we would release the Nystul’s Infinite Dungeon in a timely manner, and was able to produce an ashcan copy for the backers. However, in the end, the various unresolved issues proved to be too much, and holding on to Nystul’s Infinite Dungeon was simply holding back on D3 Adventures’ transition into a more productive company.

From this point forward please address all questions and concerns for Nystul’s Infinite Dungeon to Mike Nystul.