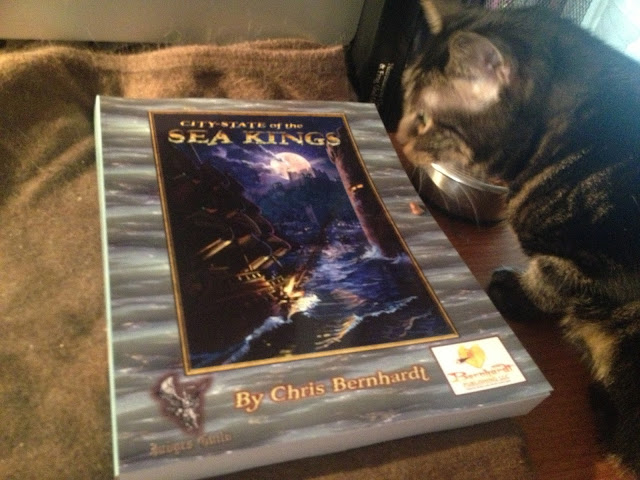 This book is more massive than I expected. City-State of the Sea Kings clocks in at 380 pages and a map. The map itself is two-sided. One side has the numbered hex map of the Isle, the other side has the map of the city. Both are very well done.

I didn't realize that this is one of the last projects that Bob Bledsaw senior had an active hand in (but I found out that and more reading the foreword - good thing I didn't skip that like usual).

It uses the "Judges Guild Universal System" for stats, which is easier to understand and convert (for me at least) then the system used in Lich Dungeon and the like. Still would have preferred OSR generic, but the system used has history behind it and is familiar to many.

Layout is easy on the eyes (I do wonder about all of the highlighting throughout the text, but maybe that will sort itself out with a solid read).

You probably could run a full campaign from beginning to end on this isle.

I want to move this to the top of my review pile - but that pile is getting friggin huge! Still, City-State of the Sea Kings is calling to me - loudly.
Posted by Tenkar at 5:51 PM