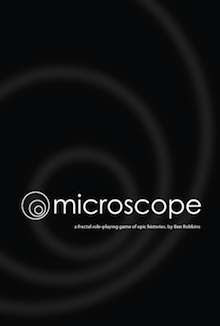 While killing time last night waiting for gamers that didn't appear, Alex from Bad Wrong Fun and Games That Can Not Be Named showed me his copy of Microscope.  Now, I had heard about Microscope from the emails and such from Bad Wrong Fun.  I noticed that it was being used to help design the history of the RuneQuest campaign that Alex would be running.  I was intrigued, but had no idea what it was.  Now, I'm a bit closer to understanding.
In a nutshell, Microscope allows players to role play events in the history of the shared world, history that they are making up as they go along.  Well, that might be a bit too simple of a description, so I'll try and see if I can do better.
Here's a bit from the book itself:

Microscope works differently than some other role-playing games you might have played, so let’s abandon some preconceptions:

You won’t have your own character.

You won’t play the game in chronological order. You may know all about the future, but be surprised by the past.

You’ll build the story from the outside in. You’ll decide the big picture, the grand scheme of history, and then burrow down and carve out the details.

So think big: you have a massive chunk of history to play around in.

Well, that probably still doesn't explain it too well either, but it's closer.
Let's see, the is no GM.  You need two to five players.  You also need a hell of a lot of imagination.
After deciding on the beginning and an end, you start working on the middle - the history that takes you from start to finish.  In a way, it really is that simple.
This is collaborative history building, with the twist that each player has a huge impact on the collaborative history that is defined throughout gameplay.
Heck, the overview of play takes up just a page.  The concept is simple, but the result is a complex history that makes a world seem alive - or at least, one hopes you end with that result.
To paraphrase Alex:  "If during the world building, the players decide that The God King was slain with the Sword of the Sun and later, during the playing of the actual campaign set in the collaborative world players come across hints about the existence of the Sword of the Sun - they know it's history, they know the events surrounding it.  It's a real piece of history".
Hmmm... I may need to add this to my resources used for QUERP although I'm not sure how well this would work via G+ Hangout.  I think some of the intimacy of literally being around the table might not be essential, but I suspect it helps in the process.
From the blurb:
What is Microscope?
Humanity spreads to the stars and forges a galactic civilization...
Fledgling nations arise from the ruins of the empire...
An ancient line of dragon-kings dies out as magic fades from the realm...
These are all examples of Microscope games. Want to explore an epic history of your own creation, hundreds or thousands of years long, all in an afternoon? That's Microscope.
You won't play the game in chronological order. You can defy the limits of time and space, jumping backward or forward to explore the parts of the history that interest you. Want to leap a thousand years into the future and see how an institution shaped society? Want to jump back to the childhood of the king you just saw assassinated and find out what made him such a hated ruler? That’s normal in Microscope.
You have vast power to create... and to destroy. Build beautiful, tranquil jewels of civilization and then consume them with nuclear fire. Zoom out to watch the majestic tide of history wash across empires, then zoom in and explore the lives of the people who endured it.
Mock chronological order.
Defy time and space.
Build worlds and destroy them.
A role-playing game for two to four players. No GM. No prep. Microscope was playtested for two years by over 150 awesome gamers.
Posted by Tenkar at 8:42 PM