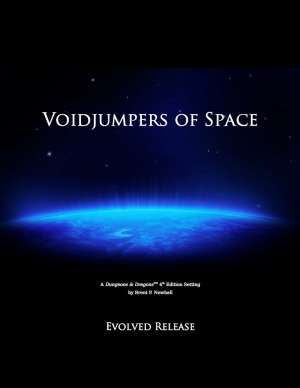 Disappointed that Spelljammer never seemed to hit all the right buttons?  Maybe you just want a new take on it.  Or, God forbid, you might want to try it in your 4e game ::shudder::.  Eh, maybe use it in Pathfinder and ACKS.  In any case, Voidjumpers of Space is a new spin on it.

Updated: This second release contains greatly expanded adventures, expanded stat blocks (Essentials-style), new ship types, a much cleaner layout, and many more small improvements.
There's this legendary D&D setting: Spelljammer. D&D in space. Wizards and barbarians on wooden sailing ships, flying through space to plunder shattered worlds.
Unfortunately, TSR rushed the setting into production, so many of its components suffered from wonky mechanics. It was an imaginative setting that could be frustrating to play. And sadly, it wasn't updated for either the 3rd or 4th editions of D&D.
I'm now attempting to fix that.
This is the second release of Voidjumpers of Space, an attempt to solve all of those problems. It's free (as in beer); you can donate a couple of bucks if you feel it's worth your money.
A few goals here:
Head over to my blog, the RPG Doctor, for more information. Thanks for reading; may Voidjumpers find a fun place in your game.
Posted by Tenkar at 7:00 PM