On The Second Day of Free Holiday Swag, My Bartender Gave to Meeeeee... The Medieval Mysteries Role Playing Game 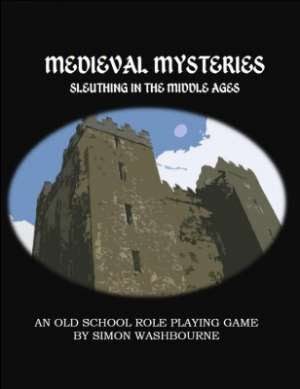 Apparently there is a whole genre of fiction that has passed me bye.  I need to rectify that.

The Medieval Mysteries RPG, subtitled Sleuthing in the Middle Ages, is an RPG that covers the notch of, sure enough, medieval mysteries.  It uses the same stripped down OGL engine as yesterday's Go For Yer Gun! that I posted yesterday with one major change - Hit Dice progression stops at 4th level.

If you have a background of reading medieval mysteries, you have enough here to run a game.  If you don'y (I don't) you'll probably need to read from the suggested reading list for inspiration.  I plan to track down a book or two from the Brother Cadfael series after (virtually) thumbing through this.

The Brother Cadfael novels of Ellis Peters, created a massive following of readers and spawned a whole new genre that was to become the biggest growing genre in new fiction. The Medieval Murder Mysteries RPG is designed to emulate the medieval detectives like Crowner John, Hugh Corbett and Owen Archer, found in the works of Bernard Knight, Paul Doherty and Candace Robb. It uses the same simplified version of the WoTC OGL system found in the popular Go Fer Yer Gun! rpg. It features nine character classes, including the Apothecary, Crowner and Scholar, a new simplified skill system, a grittier combat system where hit die stop at 4th level as well as rules for wound infection, details about crime and punishment and a sample adventure. The Medieval Murder Mysteries rpg contains all you need to go sleuthing in England in the Middle Ages. Includes a huge reading list of medieval mystery writers and their novels.
Posted by Tenkar at 8:35 PM