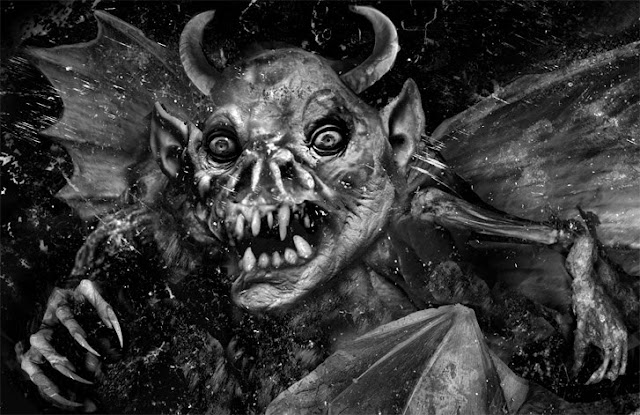 Yep, back to the long ass review of Weird Fantasy - Grindhouse Edition (I never know if Gindhouse is one word or two... ah well).

On the Magic part of the rules, and magical it is.  If what James did to many of the classes irks me (and it does), what he did with the spells and magic excites me.

Let me start with my one pet peeve on this section, just so I can get it out of the way - the frickin' header art is annoying, repetitious and a waste of about a quarter of each page.  There, I've said it.  I feel much better now that that is off my chest.

As for the spell lists themselves, they are trimmed and tweaked.  D&D mainstays are removed (Fireball, Lightning Bolt, Raise Dead, Resurrect, Wish - etc) which certainly lowers the power level to some extent (and in no way prevents the GM from placing such spells and powers in the hands of NPC adversaries) and makes magic a bit more subtle then in other OSR style games, but it is the tweaks James places in other spells that really sets the tone.

I'm going to use Animate Dead as an example of what James has done with the flavor text and spell descriptions:       This spell energizes the faint memories of life that cling to the bodies and skeletons of people, allowing them to move and act in a gross mockery of their former existence. Because the entities inhabiting these bodies are chosen by the caster, these undead are under his total control. However, the faint memories of life retained by the bodies struggle with the invaders, and this conflict makes them destructive. They will always interpret any instructions in the most violent and destructive manner possible. They will also prefer to attack those they knew in life, no matter their former relationship with the person in question.
The bodies remain animated until they are destroyed. One hit die worth of undead per level of the caster may be created per casting. The caster assigns one or two Hit Dice per undead as desired. Each special ability desired for the undead by the caster increases the Hit Dice “cost” of undead by one (except energy drain, which increases it by two) without increasing their actual Hit Dice. Only mindless undead are created by this spell, and they must be commanded verbally.
That description is many types of awesome, both from flavor and the rule tweaking perspective.  If you take nothing else from the WF ruleset, please liberally steal from the spell section.  It has many hidden gems.
The Summon spell must be mentioned on it's own.  This lowly 1st level Magic-User spell takes up nearly 10 pages.  Not so lowly after all, is it?  Remember, Weird Fantasy doesn't have a Monster Manual or listing, so the Summons sell gives you a series of charts to find out what manner of creature the PC has summonsed from beyond.  Heck, you even need to see if the caster survives that casting.  Excellent work up of this spell.  My hat's off to James.
Next up - The Referee Book
Posted by Tenkar at 11:10 AM