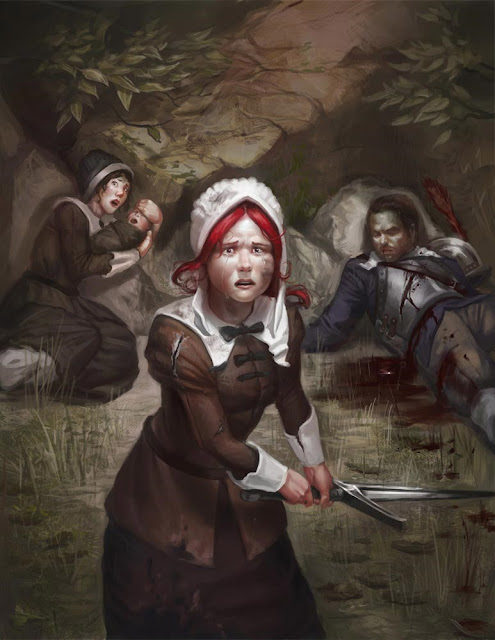 Time to move on to the meat of the review.  The rules.  If you have the LotFP Weird Fantasy Deluxe Edition, you've seen much of this before, but the presentation is much better.

Character generation is 3d6 in order.  If the character modifiers and up to less then zero, you get to ditch the character.  Yes, very old school.  There is one thing to keep in mind - stat modifiers are very important in WF.  With only fighters increasing in combat ability and the extreme rarity of magic items in the default setting, having good stats can make a huge increase in your character's survivability.  It doesn't mean your character has less viability necessarily, as the rules are fairly lethal in the first place.

We have 4 human character classes, which are pretty much the 4 core classes of the OSR.  Then we have the classic demi-human classes: Dwarf, Elf and Halfling.  I'll discuss the human classes first.

Fighters are the only ones that increase in combat.  They have the best HD after the Dwarf and have access to combat maneuvers.  In current gaming parlance, they are the party's tanks.  They get access to the combat maneuvers Press and Defensive Fighting.

Clerics are the party's healers.  Many spells are changed from the norm you might expect, but I'll be covering that at a later point.

Magic-users are those that deal with forces that man is not meant to know with.  Again, many spells have changed from what you know.

The biggest change from the baseline is the Specialist.  More then a thief, his skills and abilities revolve around a D6.  If you want to experiment with adding classes to Weird Fantasy, the Specialist is the base to work from.

Dwarves have the best HD in the game.  They do NOT increase in combat ability but they do get access to the Fighter's Combat Abilities.

Elves are sort of a Fighter / MU combination.  Better HD size then a magic-user, spells like a MU, combat maneuvers like a Fighter but w/o the Fighter's increase in to-hit.

Halflings are the "Saving Throw Specialists".  I don't know what else to say about them.  Maybe the party can use them "Polish Mine Detectors" (not tying to be offensive here).  They seem pretty useless.  Come to think of it, Dwarves seem pretty useless too.

I understand why James does away with an increase in combat abilities for all but fighters, but it does make the Dwarf and Halfling Racial classes pretty worthless, especially if you only have a party of 4-6.
So I'd personally remove them from the players choices and leave them as NPCs, or you risk handicapping the party in an already pretty lethal game.

So ends the second part of the LotFP Weird Fantasy RPG Grindhouse Edition.
Posted by Tenkar at 7:18 PM