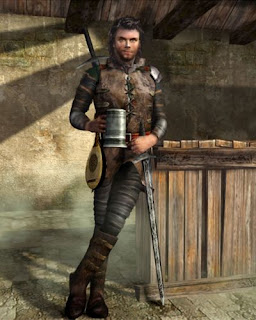 Well, I sent off my take on the Bard for Swords & Wizardry last night - we will see if Matt has a place for it in Knock Spell #6.  If he doesn't, I'll post it up here.

I had a blast working on it, even with all the things i wound up NOT using (like the turning table for Charm / Changing Crowd Reactions), additional languages spoken (I figured being given a chance to READ almost anything was better balanced), new spells / songs (would have added major length to the submission - they can always be added later), instruments (and a bonus to use them) - this stuff was cut not because it wasn't useful, but because it wasn't needed.  Short and sweet.

The TrollGod informed the members of Trollhalla that Fight On! #13 is going to be dedicated to Ken St. Andre, for all his work on RPGs (Go Tunnels & Trolls!).  Maybe I can work on a T&T submission to Fight On!

Email ThisBlogThis!Share to TwitterShare to FacebookShare to Pinterest
Labels: bard, Fight On, knockspell, Swords and Wizardry, Tunnels and Trolls