The Draconic Archeologist: Sing It To Me Baby! - Strategic Review #6 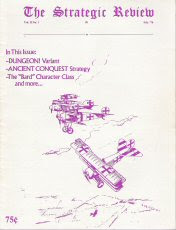 Strategic Review #6 (or if you are following at home, Volume 2 #1) gives us the first view of the Bard class for D&D.  If you have your AD&D Plater's Handbook, you might want to refresh your memory– or not.  The AD&D Bard broke more rules... lets just say it broke many rules and was a fairly broken class.

The D&D Bard was a jack of all trades.  He fought as well as a cleric (but without the weapon restrictions), he has the abilities of a thief half his level (rounded down), get's access to magic-user spells (but at a much slower pace), can charm, legend lore... he really is a jack of all trades.

We get some magic instruments for the ladies man too.  Not bad for his first showing.  Too bad it went down hill for the class with AD&D.

I barely remember the old Dungeon! board game.  One of my non-gaming friends had it in junior high, and the few times I played it was with him.  If you still have a copy, Dwarves and Clerics are added to the mix in this issue.

Sage Advice gives us  some corrections for the Greyhawk supplement.

Crap, almost forgot the Alignment map that I skipped over in my Bardic excitement.  Apparently Werewolves are almost (but not quite) Lawful Neutral.  Even better is Liches are on both the LG and LN side.  I could really dig being an all powerful undead Lawful Good Lich Paladin.  Hmmm, Paladins are REALLY REALLY Lawful Good, Liches are just Lawful Good.  Ah well, there goes that hole in the alignment chart I was hoping to drive a semi thru...
Posted by Tenkar at 10:34 PM