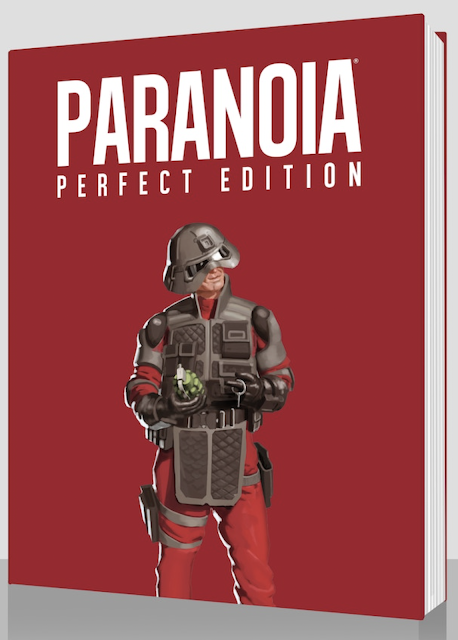 I've been a huge fan of Paranoia since the very first edition - my awesome boxed set that was missing the 2d10 dice that were supposed to have been included. I even playtested a scenario for Hill Sector Blues, and the Yellow Clearance Black Box Blues is still one of the finest RPG adventures ever written.

Mongoose Publishing is Kickstarting a new edition of Paranoia. Sure, there have been a number of editions over the years, but damn, it's such a great game for conventions and one-shots.

About 60 bucks get you the new edition of Paranoia, the Paranoia Perfect Edition in print and PDF, and that includes shipping. I'm in. There are other backer levels, but this one is mine ;)

Say hello to Paranoia Perfect Edition, otherwise known as ‘that cool game with a computer and Troubleshooters, and you shoot everything, and the GM lies, and you die repeatedly but holy cow is that game fun’.

Paranoia created controversy simply by being created. It took the traditional RPG tropes of cooperation, problem-solving and epic adventures against evil and turned them on their heads. Paranoia uses competition, problem-blaming and confusing missions against whatever you were told was evil: a villain, a convenient patsy or evidence of government corruption. Above all else, Paranoia is a roleplaying game that knows it should be fun and entertaining, so it focuses on those and not silly things like plausibility or internal consistency.

You play a Troubleshooter, which is like a volunteer fireman but for police, except it’s not voluntary and people hate you. You receive missions from everyone’s leader and best friend (as required by law), an AI called The Computer. Your job is to find trouble and shoot it. What kind of trouble? Mostly those declared traitors, which includes anyone with a mutant power or who belongs to an illegal secret society.

Oh, your character has a mutant power and belongs to an illegal secret society. So do the other players. And each of you has a laser pistol. Now, play nice! Or shoot each other in the back. That’s more likely.