It's Official - Troll Lord Games and Frog God Games are Teaming Up! 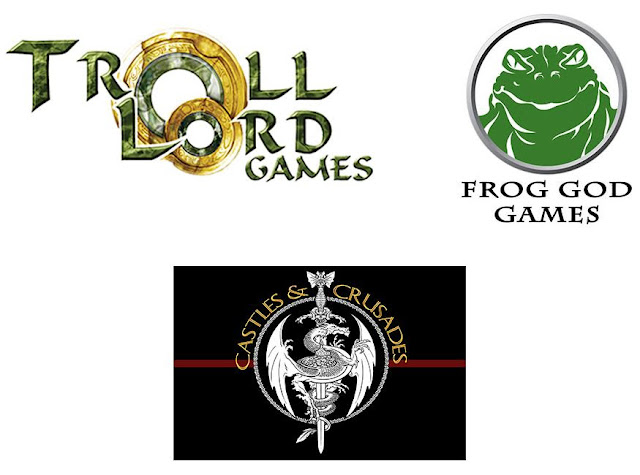 I heard about this a few days ago, but it wasn't for me to break the news. I received this email late this afternoon from Troll Lord Games:

Troll Lord Games and Frog God Games are pleased to announce that they have reached an agreement to officially support the Castles & Crusades role-playing game via Frog God Games products.

Troll Lord Games has published the C&C RPG since its first printing was released in 2005.

Frog God Games will support the C&C game with supplements such as adventures, bestiaries, modules, and the like. Their first venture into publishing C&C products happened this autumn with their IndieGoGo campaign, “Halloween Double Feature.” The IGG campaign promoted the release of two adventures for the C&C game — Fungus God from Outer Space and Heresy of Rot. Fungus God from Outer Space is authored by Casey W. Christofferson, who is well known to C&C fans due to his many supplements written for C&C and 5e under TLG’s banner, especially Mythical Companions, Free City of Eskadia, and his Haunted Highlands series of adventures. Heresy of Rot is co-authored by Levi Combs and John Maguire, two more established names in the Old School Renaissance (OSR) of which C&C is a progenitor. Both products are now available on DriveThruRPG.com in PDF format with Print-on-Demand versions to follow soon.

Steve Chenault (CEO of Troll Lord Games) said, “Bill and I have been friends for over two decades. We have collaborated on countless projects and spent many an hour discussing projects, industry, and news at conventions from Vegas to Indianapolis. He is one of my closest friends in the industry and I trust him implicitly.

Frog God Games (and Necromancer Games), with Bill at the helm, has created some of the most dynamic, fun-filled, action-packed adventures for the RPG community (Vampires and Liches for the win!), so the idea of seeing them converted and produced for Castles & Crusades, our flagship product, is beyond exciting. Everyone here at TLG is pumped about this, as these adventures will fill some long-neglected holes in our adventuring ranks. I cannot wait to see these hit the shelves and tables! And personally, it will be great to work with Bill and his crew again!”

Fans of both companies should be on the lookout for more products from Frog God Games that will support their favorite RPG. Chatter regarding the venture was made public in September 2022 via Troll Lord Games’ Twitch channel, where they played gracious host to a trio of members of Frog God Games.