I Get to Roll Up a Psionicist 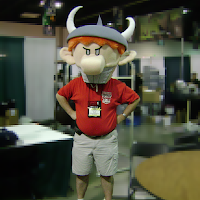 OK, this is my second go because I didn't care for the 1st one.*

I don't want to post any spoilers for my fellow player who I know sometimes reads these posts, but I'm getting the opportunity to create a new PC...read that however you want to.

I managed to talk my GM into letting me create a psionic character, which means I finally have a reason to read the Basic Psionics Handbook. The GM was a little hesitant, thinking that he will have to re-work the entire "campaign", but one of my fellow players was like, "....but do you really?"

That kind of struck a nerve with me, and not in a bad way. As a GM, I get it.....someone wants to bring in this whole other thing into your game and it's natural to think about all the stuff you need to do to accommodate, or I even dare say cater to, that player in order to make it work. As a GM I think we all default to how our campaigns are these little well-balanced masterpieces and if we introduce something new it'll wreck everything.

Clearly laughable in this particular case because these sessions aren't "masterpieces" and our GM is introducing new shit all of the time. Just an observation, not a dig. If the game wasn't fun I wouldn't be playing.

Game balance is important, but I also feel it's more important within the party. Everyone needs to feel like they contribute and get an opportunity to "do their thing" or to even shine occasionally. If I have a PC that can just go in Mind Blasting everything in sight, well that's unbalanced.....

......but after reading the rules that's not really something I'd be able to do. The rules, so far, seem pretty balanced. Nothing like what I remember from 1st Edition, not that I ever rolled up a PC with the requisite stats for those rules antyway.

Now I'm totally thinking of tweaking things to be a great supporting character. Not going to be having my moment in the middle of a dungeon combat and in many ways this PC might be boring, but I'll have fun checking out the rules.

Besides, if my PC gets too powerful I'm sure the locals will rise up and a mob will tear her apart for being a "witch".

*I had a long-assed post about this whole Defamation suit and why I thought it was bullshit, but IANAL and if you're interested you can look that shit up yourself. I'm of the opinion that this is clearly a SLAPP suit and somebody either has a lawyer that will do anything for some more billable hours or said somebody has more money than sense because if I hire a professional to advise me I generally want to follow that advice...that I paid for.
For now though.....
Posted by Christopher Stogdill at 10:33 AM