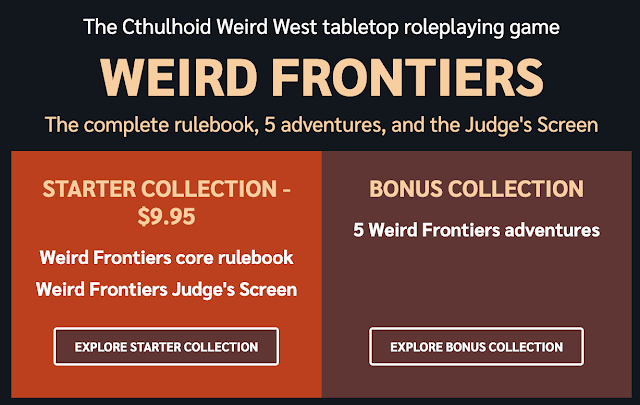 I backed the Weird Frontiers RPG Kickstarter and received my copy earlier this year. It is a beautiful beast of a book, simply oozing with atmosphere and playable content. I must say I am truly surprised and pleased to see this available on Bundle of Holding, as Weird Frontiers should be in as many hands as possible.

Howdy, trailhand! This all-new Weird Frontiers Bundle presents Weird Frontiers from Stiff Whiskers Press, a standalone Lovecraftian horror-Western tabletop roleplaying game based on the Dungeon Crawl Classics RPG from Goodman Games. In an alternate 1865, cultists of Nyarlathotep brought on the Seven Days of Night to awaken long-dormant Elder Gods. Now heroes with extraordinary abilities stand against an ever-growing evil in a wounded country still recovering from the bloodiest war in American history. You can turn tail or take the fight to the night, and you ain't about to be called yeller! Saddle your horses and clean those irons, 'cause there's something slithering across the dark frontier and it's dead set on making vittles out of you and your ragtag posse.

For just US$9.95 you get all three titles in our Starter Collection (retail value $45) as DRM-free ebooks, including the complete 908-page Weird Frontiers RPG core rulebook, the Judge's Screen, and the Trail Map.

Nest of Snakes adventure for Weird Frontiers - And if you pay more than the threshold price of $20.18, you'll level up and also get our entire Bonus Collection with five complete adventures worth an additional $50, including Never Swallow the Worm!, Not So Fast, Billy Ray!, Dig Three Graves, The Malevolent Seven, and Nest of Snakes.