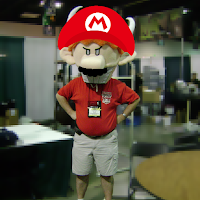 I'm definitely a child of the 80's like so many of us that enjoy the OSR. Sometime between when I first picked up the PHB and the time I got to play my 1st game of the Magenta Box, I had discovered the fun that was video games. At first it was seeing a friend of the family having an Atari, and if I was good getting a turn at Missile Command. Then it was the rich kid down the block owning an Intellivision, which I never got to touch.

I also didn't get to really play the Defender arcade game when the local pizza joint got it, because the big kids would hog the machine. I swear one guy could play that thing for an hour straight on one quarter.

Then in sixth grade, which is when I finally got to play in a "proper" D&D game (what I did before was very seat-of-the-pants fumbling around the rules), a small video arcade opened up over by my old school. They had a few pinball games and some iffy video games, BUT they had Donkey Kong, which I enjoyed...well kind of. I have always sucked at Donkey Kong, but it's been a special game for me.

These days I have an Xbox and plenty of cool AAA games, but I still love my old-school, quarter-eating, standup arcade machine. For a couple years now I've been collecting ROMs and I've picked up Launchbox. I've also been picking up joysticks, buttons, and basically everything else I need to create an arcade machine. Now that I have my own place I have the space and (soon) the facilities to create my arcade machine. Have you ever looked at the process for building one of those things? That's a lot of work, and I'm assuming a bunch of money for something that I might not be able to pull off.....

This last week I was screwing around of Facebook and found out about a large video game collection being auctioned off in Tulsa. There were a few non-functioning cabs and I thought maybe I could pick up one that had nothing inside of it, and was in bad shape to begin with, just to take apart and use as a template to cut out my own. Hell, I'd drive 6 hours and pay $50 to get a solid template if it saves me hundreds in wood.....and probably a couple of hours of trying to accurately measure out the plans I have. Basically I know my limitations, and "measure twice & cut once" doesn't always work for me.

Anyway I discovered they had a non-working Pony IV machine and that could save me the entire process of building jack squat. It's a Jamma cab, which is a wiring standard, so all I'd need to do is get a proper connection to my computer and maybe replace the CRT with a LED TV and I'd be good to go.

Well I did win the auction and Wednesday I drove up to Tulsa to bring back my new cabs. Yes, plural......I managed to also pick up my very own Donkey Kong! There is some damage to the back edge of the sides, probably from loading it in/off of a truck (I'm sure I did some of that) and the back was replaced poorly, but it works, save the coin door. I also have the original (English language) owner's manual, and who we all call Mario is always referred to as "jumpman".

I was able to clean it up a bit, properly secure the back and replace the monitor's matting. I also took the effort to install aluminum angle "iron" along the top, bottom, and both sides of the back to cover up the minimal damage and protect it from further damage. I figured this was cheaper than replacing both sides and this way the machine is as close to original as I can reasonably manage.

The machine is hanging out in my kitchen until I get the space I'm going to keep it squared away. The Pony IV is in the garage until I can get to working on it (when the weather gets nicer, most likely).

......BTW, I still totally suck at Donkey Kong, but I have the opportunity to get better.

Posted by Christopher Stogdill at 12:22 PM

Email ThisBlogThis!Share to TwitterShare to FacebookShare to Pinterest
Labels: not Erik, video games