If You Were the Victim of a Data Breach, and the Company Never Told You, Would You be Upset? 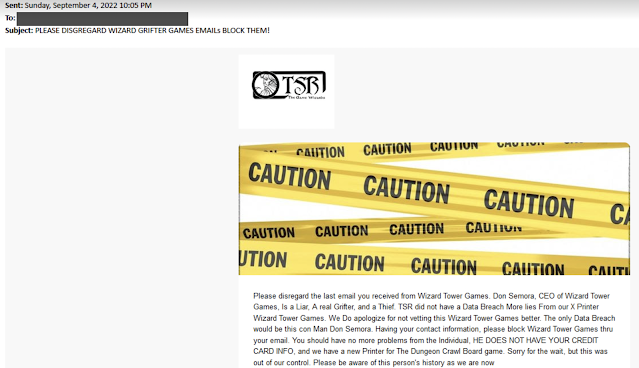 Fact: Don Semora went public with the apparent improper receiving of said data, after compiling a bunch of screenshots, files, emails, and such under subpoena from WotC.

Fact: Don Semora offered to confirm with those that were potentially at risk of having their data improperly shared if their information was part of an apparent "data leak."

Upon Information and Belief, I DO NOT believe that said data was requested by Don Semora/WTG. Don Semora has told me directly that he did not request said data, and DHSM/TSR Games has only stated that CC was not shared with Don Semora/WTG.

Upon Information and Belief, Don Semora has told me that nearly a dozen have contacted him to confirm they are on the data breach and that he has their CC or Paypal information, along with billing address, etc.

Fact: I have a "straw buyer" that has yet to receive the items ordered back in February of 2022. I personally confirmed with Don Semora that their information was included in the unsolicited sharing of data. The information included their method of payment, along with account identifiers.

Everyone here is an adult. I would recommend that you use your common sense in ensuring that your billing information is not misused.

Email ThisBlogThis!Share to TwitterShare to FacebookShare to Pinterest
Labels: nutsr