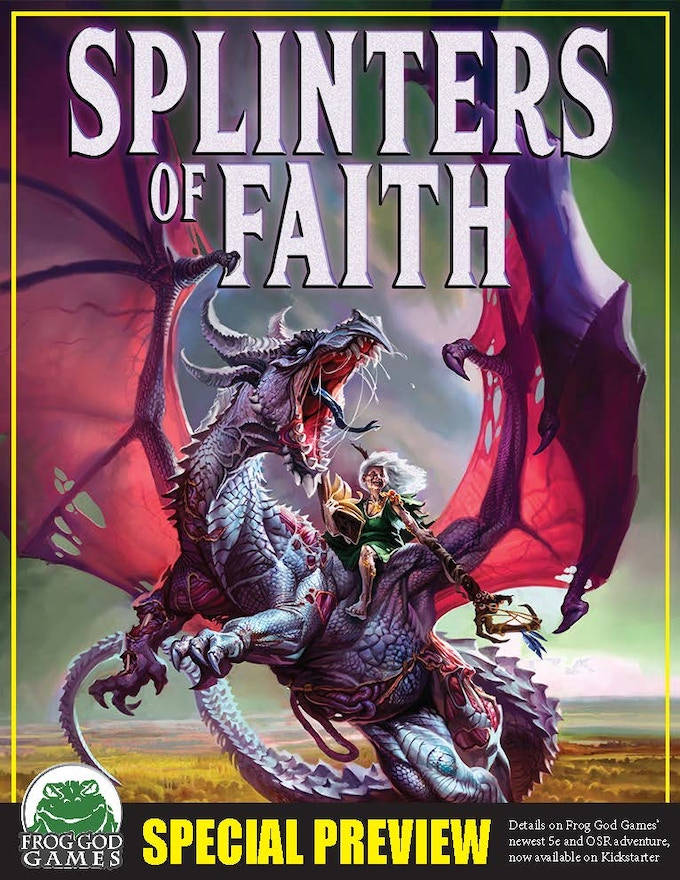 It starts with missing chickens. It ends in a showdown with an undead death-priest. Eleven linked adventures to test your characters.

For those that are following along at home, I wrote Swords & Wizardry Light for Frog God Games a few years back, and I've helped run the Frog God Booth at various conventions over the years. Although I am not "a frog", I've certainly swum in their pond.

Splinters of Faith is a Frog God Games Kickstarter, a re-release of an earlier incarnation of the same name, updated with new art, new layout, and for 5e in addition to the OSR.

Originally presented as a series of softcover modules, Splinters of Faith is now being released as a hardcover single book.

Splinters of Faith is a series of 11 linked adventures centered on stopping the return of the dread death-priest Akruel Rathamon and his undead minions. The campaign takes characters across hundreds of miles as they race to different temples to restore the broken scepter of faiths, a powerful weapon that once stopped the warlord. It all starts when some chickens go missing. But this fowl beginning might mean a foul ending for your characters. Designed for your Fifth Edition and OSR campaigns.

Splinters of Faith will be available as a full-color hardcover volume in your choice of Fifth Edition or OSR systems:

* The Fifth Edition book is a library-bound hardcover.

* The OSR volume is printed using the Swords & Wizardry rules and is a print-on-demand, case laminate hardcover. It is adaptable for any OSR system.