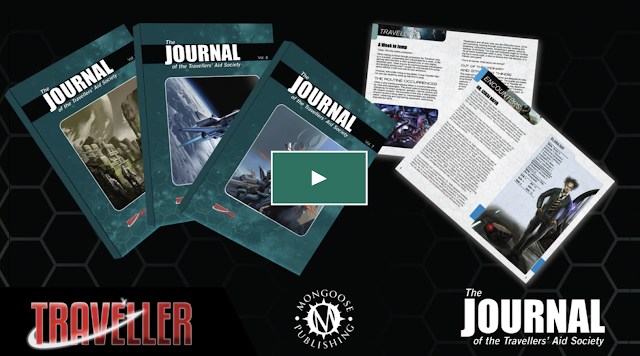 The Journal of the Travellers' Aid Society is back, with more volumes of new material in a collector's slipcase.

I've been a fan of The Journal of the Travellers' Aid Society since I first found the Traveller Starter Set in the 80s. There was always something special about the articles one would find within. When I found the reprint volumes at the Complete Strategist a few years ago, I bought a set.

Now Mongoose is Kickstarting The Journal of the Travellers' Aid Society II. Its hit a number of stretch goals, so Volumes 7-12 are included. It should be a ton of inspirational material for scifi gamers in general, and Traveller campaigns in particular.

This is what we currently have planned for Volume Seven (subject to tweaks and ever better ideas as we continue to work on the Journals):

Volumes Eight and Nine have oodles more articles, including more aliens and animals, more adventures and characters, a travelling tavern built out of an old Mercenary Cruiser, a revisiting of two classic Double Adventures (The Argon Gambit and Divine Intervention), and much, much more - we will be showcasing the contents of each volume during the Kickstarter process and courting your opinion on the articles!