The "Most Powerful" Magic Item 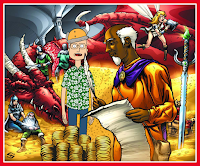 Ok patrons, quick question for y'all, but I have some framing parameters....first the Q: "What would you say is the most powerful magical item?"

Ok, so that's a real broad question so let's try to narrow it down a little bit to maybe Basic or 1st Edition AD&D, forget about Artifacts, and additionally toss out any magical items directly replicated by a spell.

Got to figure out the proper "sandbox", as it were, and Artifacts are just inherently game-breakingly powerful. Most potions have a similar spell and a Ring of Three Wishes is a no-brainer answer otherwise.....

Do you need a second to think about it?

...ok, I'm going through my Holmes Edition of Basic and I totally think that the answer is the Bag of Holding.

Now I fully expect patrons to have a different opinion on this, probably for a couple of reasons, but one is because encumbrance in D&D has always been a bit of a bother, enough that I don't think many groups really do much to track encumbrance.

Now encumbrance can really be a way-too crunchy game mechanic, but I love the crunchiness......which is one reason I liked HackMaster. I still remember geeking out prepping my PC and his pack horse for the beginning of an Against the Giants campaign. I had to figure out the weight of all the gear carried, in all the packs on the horse, and I had to make sure that not only did I have to make sure each bag/pack wasn't overloaded, but also to spread my shit er gear out across all the different packages 'cause I was sure that the GM would figure out some way for us to lose some of the gear as we trekked across the ice.

Now, that was as a player. As a GM encumbrance is one of those things that is a complete PITA.....BUT there is a good (enough) work-around: dump it off on the players! Make the players keep track of their personal encumbrance & keep track of their combat penalties for being encumbered. Just do a surprise audit once in a blue moon and if the player is caught fudging the numbers, or conveniently "forgetting" the combat penalties (there was an AC bonus is you were overloaded with too much crap!), then you hit them with a massive penalty. It's been years, so I cannot remember the penalty for failing an audit, but loss of like half XP, or immediately being placed into Dishonor sounds about right.....

Yes there is this weird idea that a lot of times things are listed in pounds, but then referenced in gold coins, with a ratio of 10:1 (i.e. 10 coins to a pound). 10 coins to a pound? That means the generic D&D coin is basically the equivalent of 2 Eisenhower Dollars.

Now *this* is really what I consider a PITA.

I think I just need to grab my old KenzerCo Goods & Gear and use that to figure everything out.....the Light Crossbow weighs 7 lbs. (page 25).

Until I bother to pull my Goods & Gear out of storage (I just used my PDF copy for looking up the Light Crossbow) I think I just need to get some Bags of Holding. I'm really thinking the true power of the Bag of Holding isn't *just* that PCs can stuff their crap inside, but that if used judiciously, the whole group can pretty much just ignore the clunky encumbrance system....

......THAT is what makes it the most powerful magic item in the game!

Posted by Christopher Stogdill at 10:00 PM

Email ThisBlogThis!Share to TwitterShare to FacebookShare to Pinterest
Labels: coins, not Erik, rules