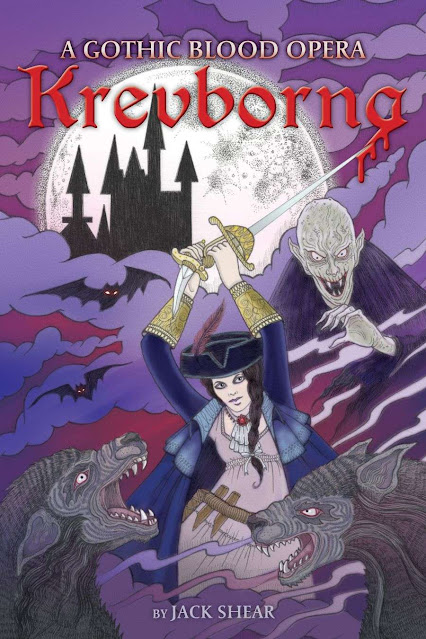 I've said it before and I'll say it now - I love campaign settings, even if I rarely use them as is. They are simply a huge source of inspiration. I prefer my campaign settings to be system light or system neutral, as I rarely wish to use them for the system they are written for.

I have a soft spot for Ravenloft, at least the original boxed set (less so the original module, but YMMV). I've always felt it was a setting that TSR/WotC simply couldn't get a handle on. It covered too much, and therefore it covered way too little.

Krevborna: A Gothic Blood Opera looks to hit many of my sweet points. System neutral, gothic horror, and a very solid 4.8 rating on DTRPG with 28 ratings.

The following review is one of the reason I'm snagging my copy:

I wish there were more setting books like this on the market. Krevborna picks a theme (Gothic horror) and maintains that focus throughout. The broad outlines of cities and regions are here as well as seeds from which GM's can create all the details they want. While some people use it for 5e, Krevborna could just as easily serve as an imaginary region of a slightly-fantastical 18th-century Eastern Europe. It would work extremely well with Lamentations of the Flame Princess or For Coin & Blood. Any period from medieval to Victorian is possible because of what the author is careful not to emphasize. Of course, the other side of that coin is that GM's will need to do some work to fill-in the blanks. For my part, I'm delighted to have found a setting with big blanks exactly where I want them - Patrick Y

Normally 10 bucks in PDF, Krevborna: A Gothic Blood Opera is on sale for only 4 bucks until late tomorrow morning.

The blood moon rises above the haunted lands of Krevborna! Once a country of picturesque villages, deep forests, and sublime mountain ranges, Krevborna is now a land of Gothic ruins preyed upon by fiends, ravening beasts, and the unquiet dead. Shadows triumphantly lengthen across Krevborna; the great powers of darkness work to usher in the dread dominion of an everlasting empire of night.