I'm a huge fan of Starter Sets for RPGs. Heck, the Pathfinder 1e Basic Box presented the Pathfinder system in a manner I would have been comfortable running, let alone laying. They tend to give you the rules you need, not everything and the kitchen sink.

For the next few days, DTRPG is running a September Starter Sale. I have a few Tavern Picks to highlight, the three I own in print.

Call of Cthulhu Starter Set - Probably the best value bang for the buck available for horror roleplaying. I can't speak highly enough for the CoC Starter Set, especially with Halloween around the corner. Book 1: Introduction and Alone Against The Flames—a solo introductory adventure, teaching you the basics of Call of Cthulhu as you play through a mystery. Book 2: Call of Cthulhu Starter Rules—the essential rules, everything needed for starting play. Book 3: Adventures—three starter adventures for your players to explore. Ready to Play Investigators—five ready-to-play game characters. Blank Investigator Sheets—ready for creating your own investigators. Player Handouts – a set of ready-to-use props. Adventures! This box comes packed with four classic adventures for over twenty hours of gameplay. Alone Against The Flames,  Paper Chase Edge of Darkness Dead Man Stomp. 9.99  6.99 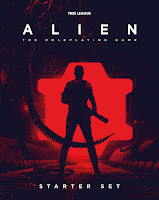 ALIEN RPG Starter Set - This was a recommended purchase by a close friend, and they were spot on. This reads like it will do a great job allowing one to play in the Alien franchise. This is a starter set for the official ALIEN tabletop roleplaying game—a universe of body horror and corporate brinkmanship, where synthetic people play god while space truckers and marines play host to newborn ghoulish creatures. It’s a harsh and unforgiving universe and you are nothing if not expendable. Stay alive if you can. This set contains everything you need to start playing: A 104-page rulebook with a fast and effective ruleset designed specifically to support the core themes of ALIEN: horror and action in the cold darkness of space. The 48-page complete scenario Chariot of the Gods by sci-fi novelist Andrew E.C. Gaska, taking you on a thrilling, terror-filled ride into deep space where no one can hear you scream. Chariot of the Gods is designed for 3–5 players plus the GM. Five pre-generated characters to play. A huge full-color, double-sided map, with one side depicting chartered space in the year 2183 and the other floor plans for the Chariot of the Gods scenario. 84 game markers for keeping track of characters, motion tracker pings, and more. 56 custom cards for weapons, personal agendas, and initiative in combat.  19.99  13.99 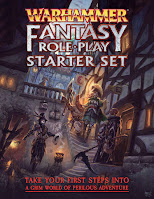 Warhammer Fantasy Roleplay Fourth Edition Starter Set - WFRP 4e feels much like 1e/2e. Thankfully, 3e and its weird dice can be ignored.The perfect introduction to Warhammer Fantasy Roleplay, this set includes: 48-page Adventure Book to teach you how to play with an introductory adventure plus 10 follow-on scenario. 64-page A Guide To Ubersreik. 6 Ready-made Characters. Introduction to Ubersreik and the Empire sheet. Game handouts. Rules Reference Sheets. 14.99  10.49