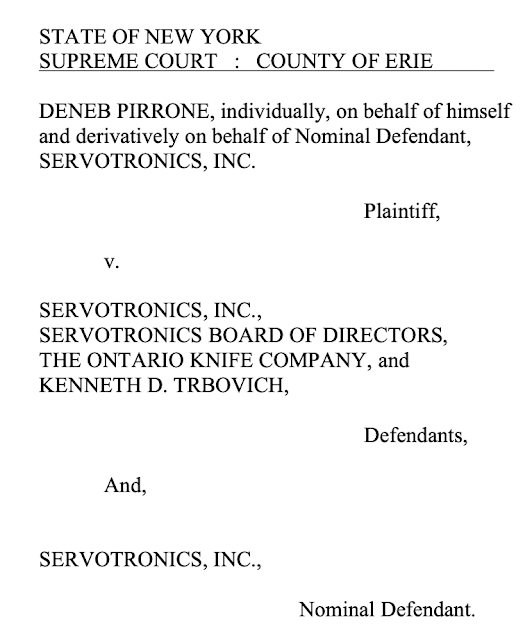 I've been asked by multiple people over the last few days as to when I was going to address the Servotronics / Kenneth Trbovich lawsuit. Well, here we go...

I became aware of the "Turbo" lawsuit Saturday morning when a friend messaged me the PDF telling me I'd be interested. I started to read it, wondering why it would be of any concern to me when I started seeing "Gary Con", "Gygax" and "Luke Gygax" get mentioned in the filing - multiple times. A lot.

It then dawned on me that Kenneth Trbovich was "Turbo" from Gary Con. I now realized I had 104 pages of a dumpster fire. Really. You can snag your own copy of the Trbo Lawsuit at this link. I dare you to call it anything but a dumpster fire.

The allegations detailed within are beyond belief and fall along the lines of "throw everything into your lawsuit and see what sticks". More, literally, is more.

It reads like the script to a Porky's reimagining. If only 10% is accurate, Turbo is a pretty shitty person. The thing is, there are exact dates given. Which likely means the plaintiff was documenting events as they happened. Leaving out the personal drama, it shows a dysfunctional business environment.

There are, however, some parts that are relevant. One allegation states that: "Trbovich’s compensation began to balloon, particularly after Gygax was appointed Chair of the Compensation Committee." (page 47) Turbo's compensation jumped 70% from 2019 to 2020; Luke was appointed Chair of the Company's Independent Directors Committee and is also a member of the Company's Audit Committee. As Turbo and Luke are/were friends, and Turbo participated as either staff or as a volunteer at Gary Con for a number of years, this part doesn't look particularly great for Luke.

Yep, Luke was paid $85k a year as an Independent Director in 2020 by Servotronics.

Nor does Luke and Turbo going on a trip to Eastern Europe together, which kinda strains the idea of an "independent director must be completely independent and they cannot receive any compensation of any kind outside of Board stipends and reimbursement for legitimate Company expenses (such as travel to Board meetings)."(page 50)

Gary Con gets its first mention with: "Gary Con was (and is) a gaming convention owned and operated by Gygax, the “independent” director and the Chair of the Compensation Committee and Audit Committee Member." (page 52) It appears Servotronics employees were sent to the con on company time and compensation.

Then we apparently have a book written by Turbo and Luke: "In March 2019, Trbovich revealed to Pirrone that he (Trbovich) had co-authored with “independent” director Gygax a book for Gary Con. Trbovich used his nickname “Turbo” as a pen name. Trbovich implied to Pirrone that he used his pen name in an effort to conceal his identity from the Board, shareholders, and anyone else with an interest in the Trbovich Companies." (page 53). The book/module in question is Knight Fall, and yes, Turbo is credited along with Luke and Chris Clark.

Pages 60-61 give us: "Trbovich mentioned, for the first time, that he knew his travel with Luke Gygax was brought into question by the Whistleblower Complaint, as well as his spending on Noura Ibrahim." and "Specifically, Pirrone reported his concerns of corporate waste, fraud, dereliction of fiduciary duties, as well as other unlawful and unethical conduct, including, without limitation: (1) Trbovich’s Company-funded all-expenses-paid trips to Prague and Gary Con with “independent” director Luke Gygax, the Chair of the Company’s Compensation Committee; (2) Trbovich’s use of Company funds to support Gygax’s personal business ventures that are not legitimately related to the Company or the Company’s business interests; (3) Pirrone’s suspicion that Trbovich is a silent part-owner of Iron Wind (Mike Noe’s company) and Monster Fight Cub (Gygax’s company); and (4) information about Trbovich’s use of Company funds for trips and plane tickets for Servotronics contractors with whom Trbovich had admitted having a sexual relationship, quid pro quo, including Noura Ibrahim.

Page 72: "For example, on January 28, 2020, Pirrone reported to CFO Bencel that he had found a link to a “streamed game event” from Gary Con where Beast Grayson (who was present on the Company’s dime and, in fact, reimbursed for his travel and lodging), participated in a live stream “celebrity” game with Gygax. Pirrone reported this information and suggested that these events are required by law to be referenced in the independence questionnaires for the Board. A short while later, HR Director Zechman emailed Pirrone, out of nowhere, requesting verification and additional information about the paid leave Pirrone had taken back in 2017."

Pages 73-74: "Reminder that when Ken had Luke Gygax and Jason Bear appointed to the board he had me punch up their resumes to make the case for their appointment. In the case of Jason, I believe, he also had me punch up the resume of Mike Noe, the president of Iron Wind Metals, which I suspect Ken of co-owning as the result of that fraudulent trip to Ohio where he forced me to be one of his "seconds" in a bonding ceremony with his mistress and then had me guard his tent while he was having sex with her. Ken used Mike's resume as "another candidate for consideration" to contrast against Jason. Basically radar chaff."

From Page 99 - This one I can personally attest to: "giving away hundreds or possibly thousands of dollars in OKC samples to gaming convention attendees—Trbovich’s friends—who had nothing to do with the Trbovich Companies;" Back in 2016 (17?) someone came to the booth with a bunch of knives and said "these are for you guys!" I had no clue who was giving it to us at the time, but now I do. Go figure.

Also page 99: "funneling corporate funds into Monster Fight Club and other businesses owned and/or operated by Officers and/or “Independent” Directors on the Board, which are wholly unrelated to Servotronics or OKC;"

Finally from page 100: "approving full reimbursement for massively lavish all-expenses-paid “business trips” taken by Trbovich and others, including Gygax, Grayson, and Redd, as well as contractors and friends of Trbovich, some of whom he had an ongoing personal and/or sexual relationship, including, without limitation, Candace Miller and Noura Ibrahim."

Phew. That's a lot of mentions.

Perhaps the most disturbing revelation is that Turbo was/is still using an AOL email account. I can't wrap my head around it ;)

In any case, these are simply allegations at the moment, and Luke and Gary Con are not named defendants in the lawsuit.

Luke reached out to me on Monday and explained that Turbo stepped in when Gary Con's operations manager left after being caught taking from the till and had volunteered to help the con through 2019 and that Turbo hasn't been involved with the Con in recent years. (Edit 9/30/21): For those inquiring, Dale Leonard WAS NOT the individual in question and left Gary Con Staff the year prior. Thank you Dale for the clarification.)

Luke has also offered to answer any questions I may have, but I'm leaving the questions to you, my readers. Add your questions to the comments below, or email me at tenkarsDOTtavern at that gmail thing. I'll put it all together and get them out to Luke

A special thank you to The Taverners that went above and beyond to provide me with clarifying details and links. Much appreciated.

Quick note, this will likely be a topic on tonight's Tavern Chat Livestream. It will fall under the This Week in Gaming Stupid segment ;)