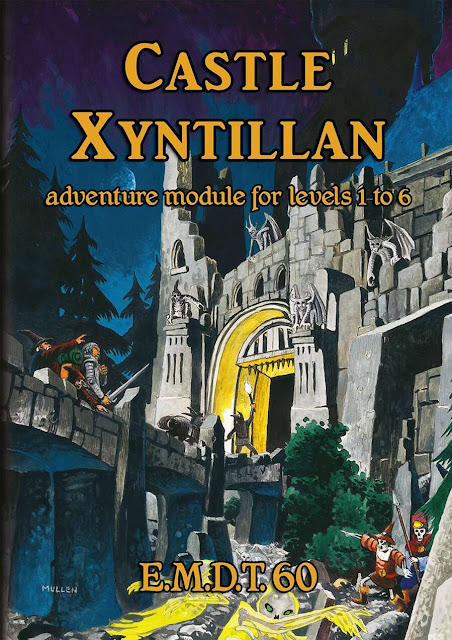 Gabor Lux is one of those names that's floated around the OSR since the early days, and he had articles in Fight On! and Knockspell zines. He always had great stuff to share, and Castle Xyntillan is no exception.

Castle Xyntiillan is Gabor's take on a funhouse megadungeon. While certainly not for everyone and every group, I've enjoyed Joe Bloch's Castle of the Mad Archmage as well as Frog God Game's take on Tegal Manor.

Until tomorrow morning, Castle Xyntillan is DRTPG's Deal of the Day and is marked down from 20 bucks to 10 bucks in PDF.

A 136-page adventure module for 1st to 6th level characters, Castle Xyntillan is a a funhouse megadungeon for the Swords&Wizardry game (and broadly compatible with other old-school systems). The module describes the three massive levels of the eponymous haunted castle inhabited by the remnants of a reclusive and eccentric family, from the soaring tower of the Donjon to the inky depths of the Oubliette (and beyond). Hidden rooms, secret passageways and long-forgotten sub-sections complete a collection of the dangerous and macabre from the gothic imagination – providing ample opportunities for exploration, confrontation, and subterfuge.

Castle Xyntillan has been designed to be versatile, open-ended, complex, and accessible. It is above all, a fantastic place – built on surrealism and dream logic, yet a place which makes a certain amount of sense if you look at it sideways. It should be entertaining, fascinating, and always a bit mysterious. Whether you would like a dungeon for one-off expeditions and convention play, or repeated forays and full campaigns, Castle Xyntillan should suit the demands and particulars of your campaign!

This electronic edition includes the following:

Email ThisBlogThis!Share to TwitterShare to FacebookShare to Pinterest
Labels: deal of the day, megadungeon, OSR, Swords and Wizardry