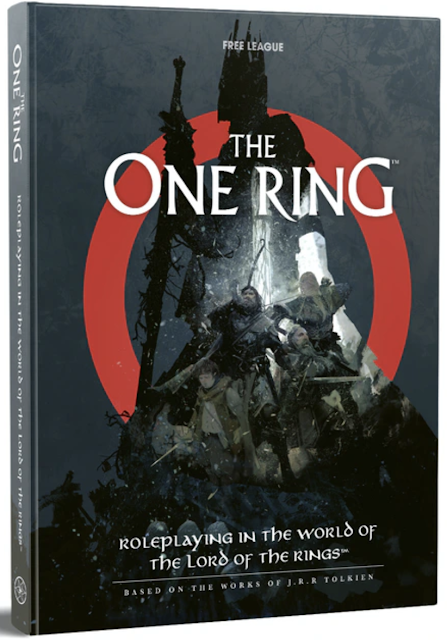 A new edition of the roleplaying game set in the world of The Lord of the Rings™
by J.R.R. Tolkien, designed by Francesco Nepitello.

Full confession - I never played The One Ring, although I have only heard good things about it. Heck, I only own in PDF. So, when I heard there was a second edition of the game in the works after Cubicle 7 lost its license, I was intrigued to see what was in the works.

Well, I've been following The One Ring Second Edition Kickstarter since its launch, and with 14 days left in the funding period, it has crossed the $1,000,000 US.

Yep, you read that right. Apparently, I wasn't the only one intrigued by the new edition.

Now, another true confession. My good friend James Spahn wrote The One Ring Starter Box. That, for me, was the icing on the cake. No more fence-sitting for me, I'm all in :)

The One Ring™ is a roleplaying game based on The Hobbit™ and The Lord of the Rings™, two extraordinary works of fiction by the beloved author and respected academic, John Ronald Reuel Tolkien, published in partnership with Sophisticated Games.

First released in 2011, its award-winning design was hailed as the best attempt at bringing Middle-earth to the gaming table to date, thanks to its thematic rules and painstaking attention to detail. For 10 years, players of the game have traveled far and wide across Middle-earth, adventuring for multiple decades of game time.

Today, it is time for the game to enter a new era – this new edition of The One Ring brings players further into the Twilight of the Third Age with a new hardbound volume, presenting:

A set of updated and streamlined rules, developed thanks to years of players’ feedback and raising the game to the standards of quality that have made Free League so popular.

A new setting to experience – the Lone-lands of Eriador in the year is 2965 of the Third Age. This is a vast land that once saw the glory of the North Kingdom of the Dúnedain.

A complete visual redesign of art and graphics, offering a view of Middle-earth that is fresh and familiar at the same time.

The new edition will be compatible with modules for the first edition, requiring only minor tweaking.

Created for the first time for this edition of the game, the Starter Set contains everything you need to start playing, and more! Focused on the Shire, this set allows for new players to enter the world of Middle-earth from the land of the Hobbits, where all the stories began. A number of pre-generated characters allow players to take the road to adventure in no time. The boxed set, mainly written by seasoned RPG writer James Spahn, includes:

Condensed rules, including everything you need to start playing in Middle-earth.

An adventure compendium, presenting a number of adventures to be played using the pre-generated characters contained in the box.

You can catch the daily Tavern Chat podcast on Anchor, YouTube,
or wherever you listen to your podcast collection.
Posted by Tenkar at 1:55 PM

Email ThisBlogThis!Share to TwitterShare to FacebookShare to Pinterest
Labels: kickstarter, The One Ring