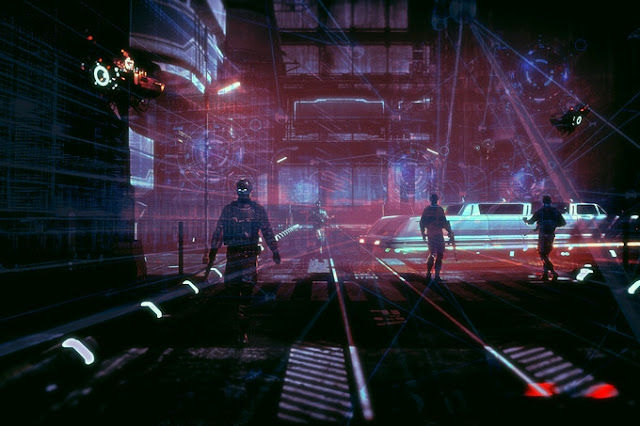 I know that I've said this before, but I love when OSR engined RPGs step into less-used genres. Neon Blood is an OSR Cyberpunk RPG, and I don't think I've seen that before. Very cool :)

Neon Blood is an OSR/DIY (we call our work Dirty-OSR) inspired cyberpunk game set in a version of the world in 2035. We don't need to go very far into the future to see how culture, tech, and politics might shape the future of humanity. It is dystopian, but all hope is not lost for ye who enter here.

The goal of this game is to take the OSR-based RPG system and roughen up the edges, throw in some chrome, pump it full of HiCap neon, and light it on fire. The rules start with the d20, but we make a firefight feel like a frenetic two-way range where your decisions and training will be a matter of life and death. And hacking will never be boring or the side gig; it easily occurs in real-time alongside a firefight without disruption to either team.

The combat is brutal and deadly, and death is one bullet or NovaWire away. Zero hit points isn't the end, but neither is it a handful of chances to not experience what comes for everyone. Even hackers aren't safe; play hacking games, win deadly prizes. As awesome as this sounds, combat is full of player-facing choices to keep your character alive and gunning. But everything comes at a cost in Neon Blood.

10 bucks get you the PDF and digital soundtrack (yes, soundtrack). 30 bucks add in a softcover book of the rules.