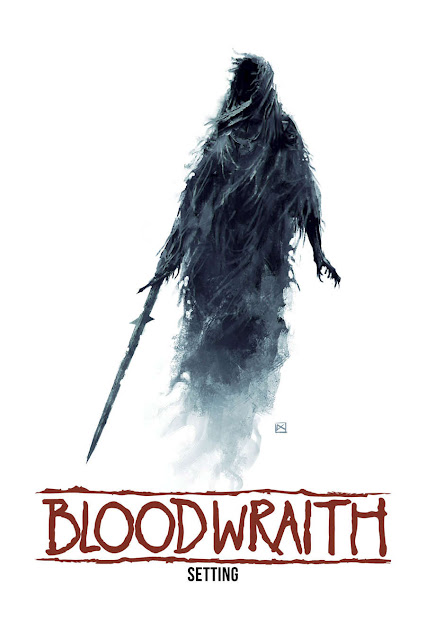 I've been a fan of Jim Pinto's work for years. He simply has a certain touch with RPGs that few have, and he's willing to take chances and push expectations. The Bloodwraith Setting Book is Jim's delving into the OSR.

Normally 9.99, until tomorrow morning (about 13 hours) the Bloodwraith Setting Book is on sale for 4.47

Bloodwraith is a stand-alone, self-contained fantasy setting for any roleplaying game system, specifically ones that focus on gritty or low-tech fantasy. This book is about the setting and style of bloodwraith, with extensive time spent on plot, setting, and tone. Mechanics and die rolls are informed by the systems used to play.

The adventure challenges of this game world focus on survival and dealing with the world in front of the characters, than dungeon-delving and super-heroics. That won’t stop people from doing those things in this world, but that is not the intent of this game world.

Any OSR system like ACK™, Dungeon Crawl Classics™, Osric™, or Swords and Wizardry™ are ideal for use with Bloodwraith, if players do not want to use the Bloodwraith rules system.

Sixty years ago, the sky erupted with blood. Not rain. Blood. Sacramental blood, born of the heavens and all the dead gods. This blood rain was known as the purge. And from this purge, faith died. Humankind knew the gods were dead. They sensed it. Felt it. The world was coated in the viscera and blood of the supreme beings who once created them.

And from this blood was born all manner of horrors. Dwarves, elves, goblins, orcs. Just to name a few. Humankind went from being a tranquil race to living at the edge of a knife overnight. Entire nations were wiped out and replaced with the despotic dwarves, powerful elves, chittering goblins, and warlike orcs. Humankind scattered to the world’s edges, leaving the bloodmarshes to the mongrel races that fell from the sky.

Humans who once stood together, became divided, forming into small enclaves. Each disconnected from the other. Each afraid to unite together again. For who could be trusted?

Which is exactly what the bloodwraiths wanted.