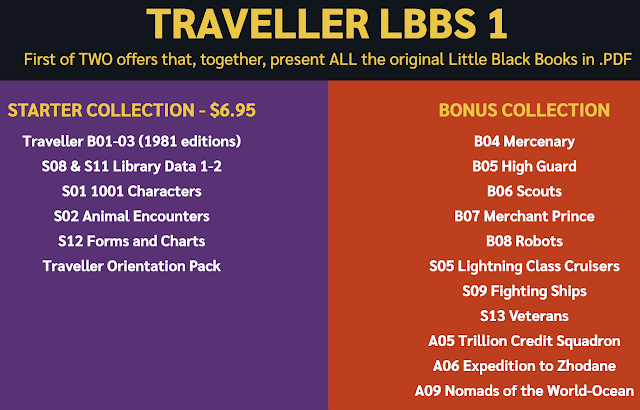 Traveller was my introduction to sci-fi RPGs. The system was simple enough, my only complaint was the lack of learning new skills as written. Still, as a GM you didn't need to track or award XP, and that was probably a blessing unto itself ;)

My introduction to Traveller was the Starter Set, with the first three books effectively rolled into one. Ah, sweet memories of rolling up Traveller Characters when I had "book room" duties. As you characters could die during character generation, it was a game within a game :)

Bundle of Holding currently has two Traveller Bundles up for grabs. The first one offers the core Traveller books and supplemental materials. 6.95 for the Starter Collection, about 18 bucks for the Bonus Collection.

Traveler Bundle #2 has a collection of adventures and supplements:

TWO supplements: S03 The Spinward Marches and S04 Citizens of the Imperium

SEVEN adventures: A00 The Imperial Fringe, A01 Kinunir, A02 Research Station Gamma, A03 Twilight's Peak, A04 Leviathan, A07 Broadsword, A08 Prison Planet

The Bonus Collection adds (for about 19 bucks):

FOUR more adventures: A10 Safari Ship, A11 Murder on Arcturus Station, A12 Secret of the Ancients, A13 Signal GK