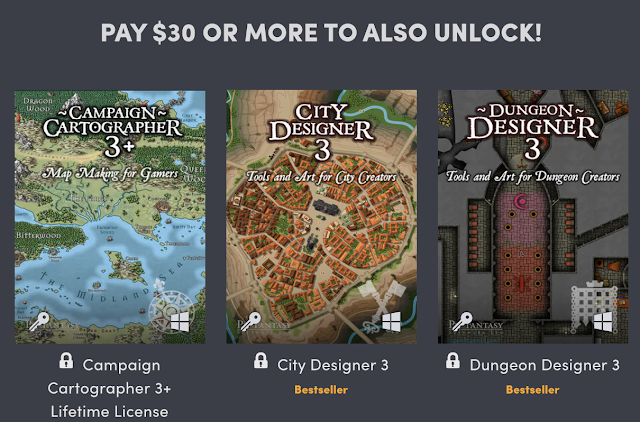 First off is the Campaign Cartographer Bundle. Let me get right to the price point-unless you already own the software, you really need to be in at 30 bucks. But those 30 bucks gets you:

Sigh. And it looks like I can run all of this using Crossover on my Mac...

Guess I'll be diving into CC and Dungeon Designer in December :)

The second bundle that caught my eye was Big Royalty-Free Music. Royalty-free music is simply an awesome resource for podcasters and Youtubers. 25 bucks get you 26 albums and over 400 tracks. The samples sound real good, and I can see myself using some to change out the music for the podcast. Heck, I'm not even talking about using it in-game sessions for atmosphere, where it would also rock. You can grab it for as little as a buck for 5 albums and 100 tracks, which probably would suffice for most ;)

Royalty-free music and sound effects to be used in video game development, live streaming, movies, YouTube, content creation and more! Get 26 albums and over 400 tracks, which include .wav, .mp3, and seamless premium licenses for music such as Shadows guild, Superheroes, Dreamagination, and Slasher.

Don't forget to subscribe to The Tavern's weekly Newsletter! We currently have 156 subscribers. When we hit 200 subscribers, I'll award 2 random subscribers a $10 DTRPG Gift Certificate.