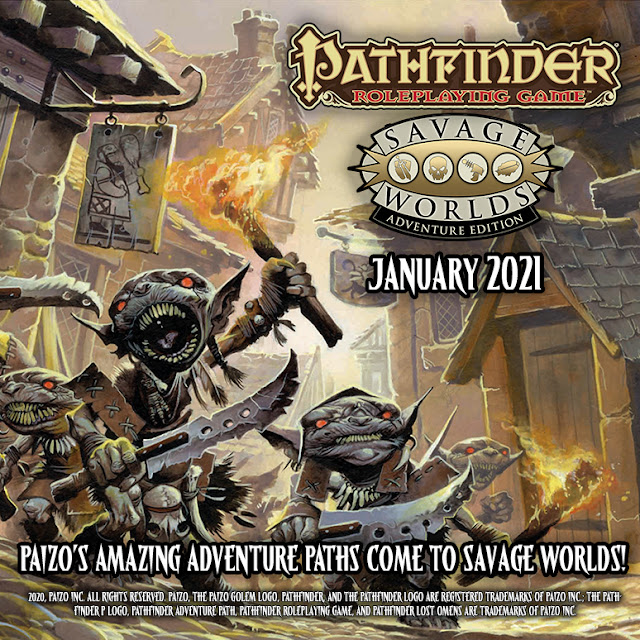 I seriously did NOT see this coming. Sure, Paizo converted one of its previous projects to 5e, and yes, Pinnacle has licensed Rifts from Palladium, but Pathfinder Adventure Paths to Savage Worlds? Damn. I actually have the first 2 or 3 adventure paths from Paizo. They made for a good read.

I may need to give my Savage Worlds ruleset another look. I never really grokked their spells and powers...

It’s Thanksgiving here in the United States. For our international friends, that’s a time when we come together as friends and family and tell everyone what we’re thankful for.

Today, Pinnacle Entertainment Group is INCREDIBLY thankful to our good friends at Paizo for letting us play in their amazing world of Golarion, setting of the phenomenally successful Pathfinder Roleplaying Game!

Following the incredible reception we had with Kevin Siembieda’s phenomenal world of Rifts®, we’re bringing Pathfinder’s fantastic Adventure Paths to the Savage Worlds™ system, starting with the best-selling Rise of the Runelords™!

Don't forget to subscribe to The Tavern's weekly Newsletter! We currently have 155 subscribers. When we hit 200 subscribers, I'll award 2 random subscribers a $10 DTRPG Gift Certificate.