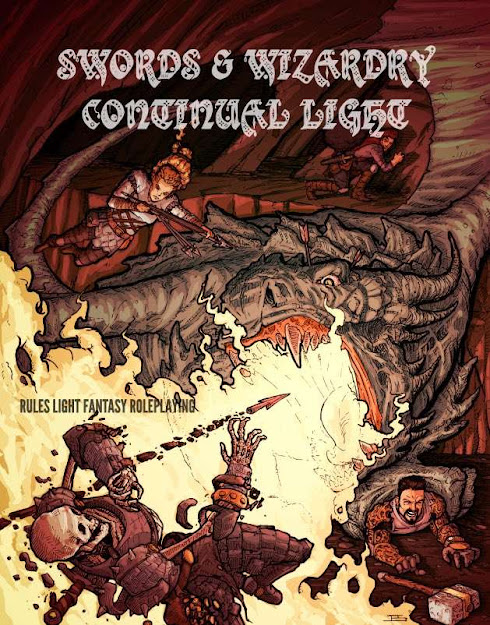 Today's Deal of the Day is The Tavern's very own Swords & Wizardry Continual Light. Normally 3 bucks in PDF, for the next 24 hours it is only 1.20. Woot!

If you like old school RPGs but want a streamlined package, Continual Light was created with you in mind.

You remember, don't you? The sounds of battle heard through the clatter of dice? The shuffling of character sheets? The war stories shared with fellow campaigners?

There is a longing in the soul of every adventurer and though it sometimes fades to a whisper, you still hear it. Swords & Wizardry Continual Light marks your return to fantasy roleplaying - or if you're curious what fantasy gaming is all about, this is the perfect introduction.

This book, a twenty-sided die, and a few six-sided dice are all you need to return to the table, recall those halcyon days of heroism, and forge brand new legends! Welcome back!

It covers four core classes (and a bunch of optional ones), four races, seven levels of play (and optional rules to keep the game going after seventh level), magic items, spells, monsters and more - all in about 17 pages of rules.

Suiable for introducing new players to old school gaming or reintroducing a lapsed gamer, pefect for pick up games, convention play and yes - even campaigns.