Sadly, today Gail Gygax went off the rails in regards to the Will Luke Gygax recently filed in a Wisconsin Court. Apparently, Gail never filed a will when Gary passed (this was surprising) and Gail is lashing out to defend her source of income - selling Gary’s gaming collection.

In the midst of her often disjointed comments and accusations made about Luke Gygax and his siblings on Facebook yesterday, she laid the following at my feet: 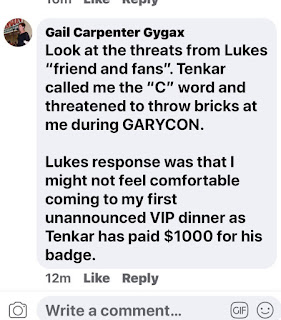 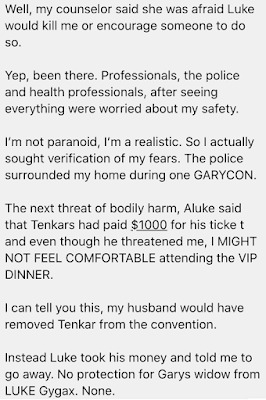 As I’ve stated in the past, I joked that Gail would trademark the “C” word if she could. This was in reference to Gail trademarking “Gygax” and filing a legal action against the “new” TSR for publishing their gaming magazine under the Gygax name.

I never threatened to throw bricks at Gail during Garycon or at any other time. I am quite sure I made jokes about Gail and her infamous bricks (a bad joke about burning rubber bricks was one of them) that she has been threatening to sell for years - Paul Stromberg will apparently be selling bricks for the Gygax Memorial. I won’t be holding my breath.

I've never been invited to, attended, or paid to attend a VIP dinner or anything similar, at Gary Con or any other convention for that matter. I never gave or paid Gary Con, Luke, or any other Gygax family member or convention staff member $1,000. Hell, Luke and I have never conversed in person.

Oh, and the first sentence is total bullshit too. If a "counselor" thought someone was in danger to be killed and did not refer it to the police, they'd be risking their license. If it was referred to the police and they took no action, it was groundless.

Can I be an asshole? Most assuredly. Have I been a burr in Gail's ass regarding the Gygax Memorial Fund? Guilty. Have I done any of what she accuses me of above? None whatsoever.

Edit: I didn’t want to address this, as I believe Gail is unwell, but there are a number of people on Facebook and elsewhere that believe her accusations without question.

Email ThisBlogThis!Share to TwitterShare to FacebookShare to Pinterest
Labels: gygax