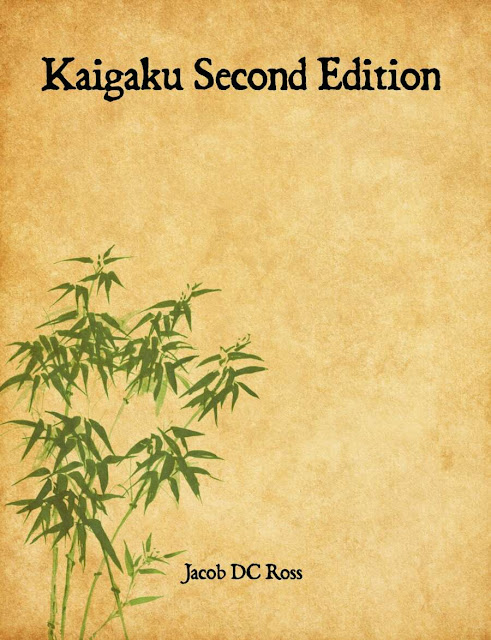 I remember being impressed with the first edition of Kaigaku. It appears Kaigaku Second Edition is based on the Stars Without Number ruleset. Huzzah! Normally 10 bucks, until tomorrow it on sale for $4.

As a result of community support for this title, 10% of the proceeds are now going to the Make-A-Wish Foundation!

This is the core book for the second edition of our bestselling Kaigaku RPG. Based on Stars Without Number Revised, by Kevin Crawford, it brings a more modern rules set to the game, while still respecting what's come before.

Visit the perilous and beautiful land of Kaigaku as a member of the samurai class, or for the first time as someone born into the less-fortunate castes. Will you play as an honorable samurai? An empowered ascetic who channels ki through gemstones? A devious courtier? Or perhaps a shadowy ninja?

Building on Stars Without Numbers' original system, you can now create characters using hybrid classes. We've expanded the list of Foci, called Techniques in this game, with three dozen new specialties. Each of the new Techniques is also perfectly compatible with Stars Without Numbers Revised, too. There are several new Ascetic Disciplines, which merge well with SWN's Psychic class.

If playing as a human isn't your style, the core book offers support for non-human species, including the foxlike kitsune, shapeshifting tanuki and many others.

There are cultural notes in multiple sections to help you immerse yourself in this world that's based on Japanese lore and history. It's explicitly set in an alternate world to give you more freedom with your storytelling. We believe that you should be able to make Kaigaku your own saga, so we've painted the canon of this world in very broad strokes.

Yep, that's an affiliate link above. With the current pandemic, I've moved to an at-home mini tap system. Please, keep me in fresh, cold beer by using The Tavern's affiliate links ;)
Posted by Tenkar at 7:13 PM